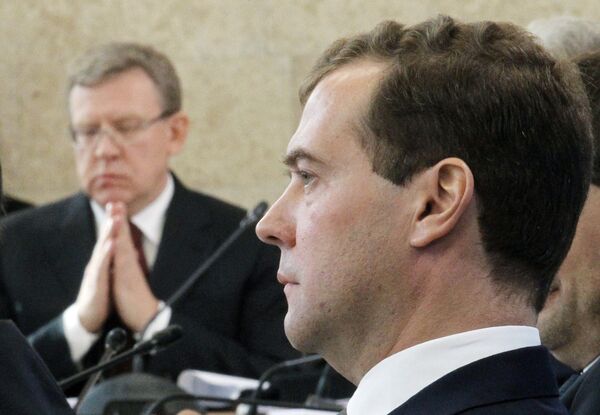 Russian President Dmitry Medvedev said on Monday that Finance Minister Alexei Kudrin should resign if he disagrees with his policies.

Russian President Dmitry Medvedev said on Monday that Finance Minister Alexei Kudrin should resign if he disagrees with his policies.

Kudrin said that before making a decision on his resignation, he would consult with Prime Minister Vladimir Putin.

"You may consult with anyone, including the prime minister, but I am still the president and such decisions are taken by me. You need to make your decision very quickly and give me an answer today," Medvedev told Kudrin.

Kudrin, 50, has served as finance minister since 2000, during which time the Russian government has paid off most of its substantial foreign debt and created oil wealth funds to soften the blow of the global slump.

He told reporters on Sunday he would decline a job in a future Russian government to be headed by Medvedev over disagreements on economic policies, in particular, on considerable defense expenditures.

"Anyone questioning the course pursued by the president or the government or anyone who has his own agenda has a right to ask me but do that openly. I will have to curb any irresponsible chatter and I will make all the necessary decisions by May 7 of next year," Medvedev said.

The Russian president commented on Kudrin's words, saying they were improper and can not be justified as Kudrin had signed all governmental financial documents without any objections.

"Nobody has revoked discipline and subordination in the government," Medvedev said.

Analysts said that Kudrin's possible resignation could see a negative response from investors, who see him as a guarantor of the country’s financial stability.

"Kudrin has always been a staunch supporter of conservative fiscal policies, he pioneered the Stabilization Fund and his departure from the government could lead to a more risky fiscal policy if his successor is less cautious and plays less independent role in decision-making," Sergei Karykhalin, an analyst on macroeconomic policies at TKB Capital investment firm, told RIA Novosti.