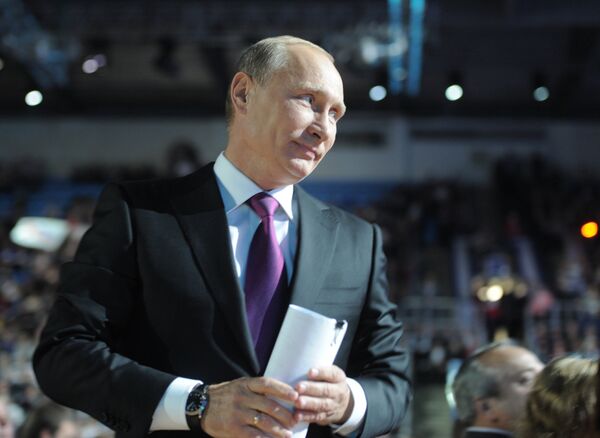 Russian President Dmitry Medvedev has proposed Prime Minister Vladimir Putin to run for president in next year’s election, ending speculation over which man would run for the post. Russian Orthodox Church hailed the ruling tandem swap and said it was held in a “peaceful and highly moral way”. “It’s wonderful that the ruling tandem reshuffled in such a highly-moral way in front of many people that saw the president’s and the premier’s good intentions,” Vsevolod Chaplin, head of the Russian Orthodox Church's press office said.

Russian President Dmitry Medvedev has proposed Prime Minister Vladimir Putin to run for president in next year's election, ending months of speculation over which man would run for the post.

Speaking at the annual congress of the ruling United Russia party on Saturday, Medvedev said he was ready to make way for Putin and do "practical work in the government." That means Putin could still be running Russia in 2024.

Earlier, Putin told the congress that Medvedev should top the party's list of candidates in parliamentary elections on December 4.

The United Russia convention voted almost unanimously to put Medvedev on top of the elections list - 582 votes were cast for the suggestions with only one vote against. Four ballots were considered invalid. The party is led by Putin and dominates Russian politics.

"Given the offer to head the party list and engage in party work, and given a successful run at the elections... I believe that it would be appropriate if the congress approved Vladimir Putin's candidacy for the post of the president of Russia," Medvedev said to a prolonged standing ovation at Moscow's gigantic Luzhniki sports complex.

"This applause spares me the need to explain what experience and authority Vladimir Vladimirovich Putin possesses," he told thousands of flag-waving delegates.

Putin was constitutionally barred from standing for a third consecutive term in 2008 and anointed Medvedev as his successor.

"I have often been asked: when are you going to make up your mind?... Vladimir Vladimirovich and I have sometimes been asked: have you fallen out with each other?"

"What we propose to the congress is a deeply thought-out decision," Medvedev said. "We were actually discussing this course of action as early as when our union was being formed."

There had been intense speculation that Putin may seek a return to the Kremlin when elections are held in March next year. Both Putin, 58, and Medvedev, 46, have said they could stand for president, but ruled out running against each other.

Medvedev said he would be ready to take over from Putin as prime minister if United Russia were to win in the December polls.

Putin took the floor after the announcement to address concerns over population decline and unemployment.

"I want to thank you for the positive reaction to the proposal for me to run for Russian president," Putin said. "For me this is a great honor."

The premier said he had "no doubts" Medvedev would form a "new, effective, young and energetic" cabinet when he headed Russia's government and "continue his work on modernizing all aspects of our lives."

Russian Orthodox Church hailed the ruling tandem swap and said it was held in a “peaceful and highly moral way”. “It’s wonderful that the ruling tandem reshuffled in such a highly-moral way in front of many people that saw the president’s and the premier’s good intentions,” Vsevolod Chaplin, head of the Russian Orthodox Church's press office said.

The United Russia's congress closes on Saturday and will reopen in mid-December to sum up the results of the State Duma elections.

While loyalists described Medvedev's decision to step down as "right and proper," Sergei Mitrokhin, leader of the liberal opposition party Yabloko, said it was "highly unoriginal."

"Commentators had predicted this outcome, and now the solution lies with the Russian people - whether they really want the same to continue for another 12 years," he said.

The head of the Communist Party, Gennady Zyuganov, said the reshuffle was to be expected but "doesn't change anything."

Others say, however, that the move came as a surprise.

"The situation has radically changed because quite a substantial proportion of people believed Medvedev would be playing his own game," said Boris Nadezhdin, a senior figure in the liberal pro-business Rights Cause party.

Political analyst Vyacheslav Nikonov said that Medvedev could replace Putin as president in twelve years, which means that “we know the configuration of power in Russia until 2036.”

Another analyst, Valery Khomyakov, said that billionaire Mikhail Prokhorov, who was ousted as the Right Cause party leader, could become the key opposition candidate in the 2012 elections.

Financial analysts downplayed the impact of the reshuffle, saying the outcome was long-anticipated. However, the move indicates stability in the Russian state power, Dmitry Sulima, a strategic communications specialist said. “And investors always take such news positively,” he added.