Putin in key speech ahead of polls 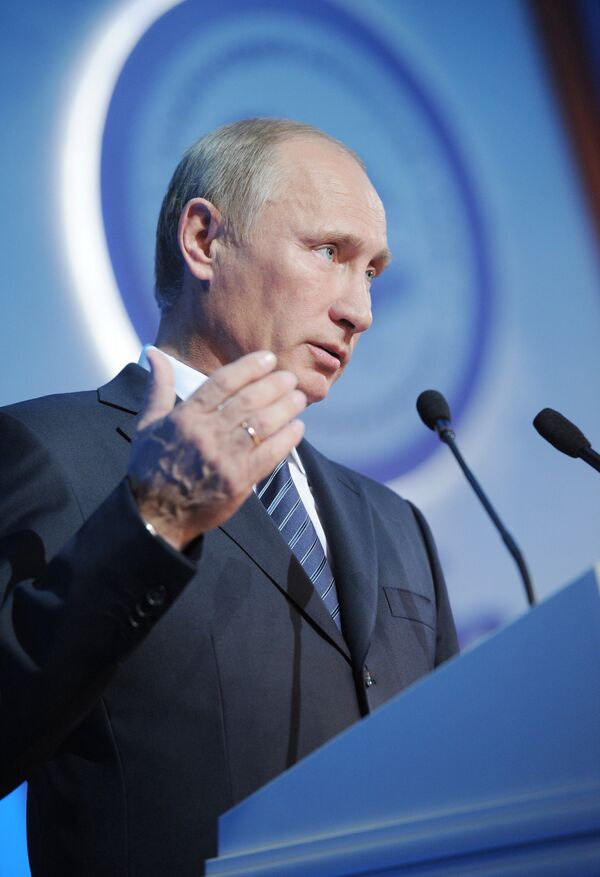 © RIA Novosti . Alexey Druzhinin
/
Go to the photo bank
Subscribe
Russia's powerful Prime Minister Vladimir Putin delivered a key speech to his loyalists on Friday amid speculation that he may seek a return to the presidency.

Russia's powerful Prime Minister Vladimir Putin delivered a key speech to his loyalists on Friday amid speculation that he may seek a return to the presidency.

In a wide-ranging speech, Putin moved to defend the country's legal system, saying it is "no worse" than America's or the UK's.

He admitted however that the system, which rights activists say is often abused by authorities, needed improvements.

"It is one of our key goals," he told the congress of his ruling United Russia party in central Moscow.

The new sentence imposed on former oil tycoon Mikhail Khodorkovsky last year drew widespread international criticism, with the United States saying it was concerned by the apparent "abusive use" of Russia's legal system for "improper ends."

Putin's comments come ahead of parliamentary elections in December and a presidential vote in March.

The premier, who has previously served two terms as president, has not announced his plans for the presidential polls. But both he and his hand-picked successor, President Dmitry Medvedev, have ruled out running against each other.

The prime minister said Russia's legal system is "no worse than the Anglo-American one, and in some aspects, maybe even better than it," because "even an ordinary citizen... can see their way around it."

He also backed calls for all court rulings and judgments to be posted on the Internet.

The Russian premier also said the country's human rights activists "should be treated with tolerance."

"There is a category of people who often criticize me, both with reason and without it, who fall into the so-called category of rights advocates," Putin said. "They are few, but they direct attention towards the problems... which, unsolved, hamper the development of society."

Russia's leading human rights bodies, including the Moscow Helsinki Group and Memorial, accuse Putin of authoritarian methods, arguing that freedom of speech and information has suffered during his tenures as president and prime minister.

Addressing corruption, the premier called for harsher punishments for those giving and taking bribes and said it was necessary to "change the psychology of our society."

"Our bureaucrats are part of our people," he said.

Putin also backed a proposal to establish a new post of ombudsmen for women's rights, but said that a definitive decision must come only through a "large-scale public discussion."

The latest figures show that about 70 percent of low-income Russians are women.

The Russian premier vowed once again to reverse Russia's demographic decline. In a key speech to the lower house of parliament in April, Putin unveiled plans to spend $53 billion on increasing birth rate and extending life expectancy.

Putin said the authorities should explain to the people the need for "bitter" austerity measures but should also "listen to the people's heart-beat."

An appeal to the heart was a key element in the successful election campaign of the late Boris Yeltsin, whose slogan was "Vote with the heart."

Putin has seen his approval rating fall recently but still remains the most popular politician in Russia.

At least 41 percent of Russians believe Putin will be Russia's next president, according to the country's leading opinion pollster, the Levada Centre.