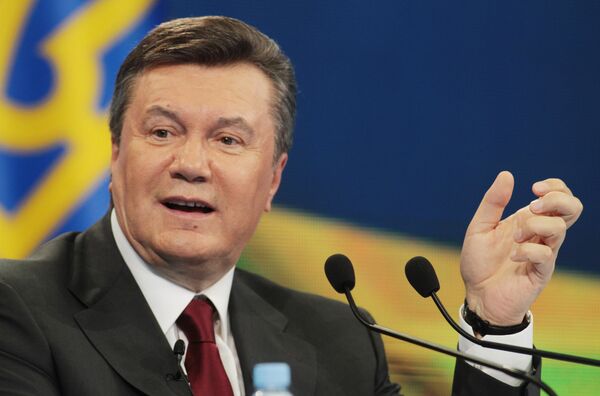 Ukrainian President Viktor Yanukovych has proposed building one more gas pipeline across his country instead of the planned South Stream project bypassing it. Analysts say Russia is unlikely to support the idea because its goal is to minimize transit risks for its gas deliveries to Europe.

Ukrainian President Viktor Yanukovych has proposed building one more gas pipeline across his country instead of the planned South Stream project bypassing it. Analysts say Russia is unlikely to support the idea because its goal is to minimize transit risks for its gas deliveries to Europe.

According to one Gazprom executive speaking on the sidelines of an investment forum in Sochi, it would be economically inexpedient to build South Stream across Ukraine. The proposed route of the pipeline is across the Black Sea from Beregovaya in Russia to Bulgaria and on to Western Europe.

"One could lay a gas pipeline via Yevpatoria in the Crimea towards the Black Sea, but this seems illogical when one can build it directly [across the sea]," Valery Golubev, deputy CEO of the Russian energy giant, said. He thinks that Ukraine's proposal has no economic advantages.

Like Nord Stream, the South Stream gas pipeline is aimed at reducing Russia's dependence on transit across Ukraine. If the two pipelines are built, Ukraine will lose a substantial part of its transit revenues.

Yanukovych's proposal is apparently an attempt to expand the range of possible compromises and facilitate the sides' efforts to resolve their gas dispute.

"Russia has absolutely no interest in Ukraine's proposal," Vasily Tanurkov, an analyst with the Veles Capital investment company, told RIA Novosti. "The reason is simple: the whole purpose of South Stream project is to avoid transit risks. If costs were the only consideration, we would not have proposed it at all; we would have invested in repairing the Ukrainian gas transportation system."

"Ukraine is dreaming of more gas pipelines running across its territory," Vitaly Kryukov, an analyst with investment and financial group Kapital, told RIA Novosti. "But South Stream will be most likely built. It is an important project and the political decision has been made." Russia's long-term strategy is simple: to end its dependence on transit countries, Kryukov said.

"Such statements are an attempt to demonstrate to the international community that Russia is not acting rationally," Tanurkov said.

New round of bargaining

The price of gas is the main issue Ukraine and Russia have been debating in the last few months. Ukraine, which currently pays $354 per 1,000 cubic meters, argues that the price is too high.

Russia is ready to negotiate a lower price if Ukraine makes it an interesting proposal, for example, if it agrees to join the Customs Union of Russia, Kazakhstan and Belarus or to sell its gas transportation network. So far, Ukraine has refused to do either, dragging out the pricing debates for over two years.

"Ukraine can influence the decision on the South Stream project only if it agrees to sell its gas transportation system," Tanurkov said. "If it does, Russia could abandon South Stream."

Vitaly Kryukov believes that Ukraine is not ready to do this now and that in a year or two Russia would lose the desire to buy. "Moreover, there will be elections in Ukraine and so a possible change of government," Kryukov said. "It would be safer for Russia as a gas supplier to build pipelines bypassing transit countries and to pass on buying Ukraine's gas transportation grid."

The sides will likely seek a new gas compromise at their talks on September 24, when President Yanukovych will come to Moscow at the invitation of Dmitry Medvedev.