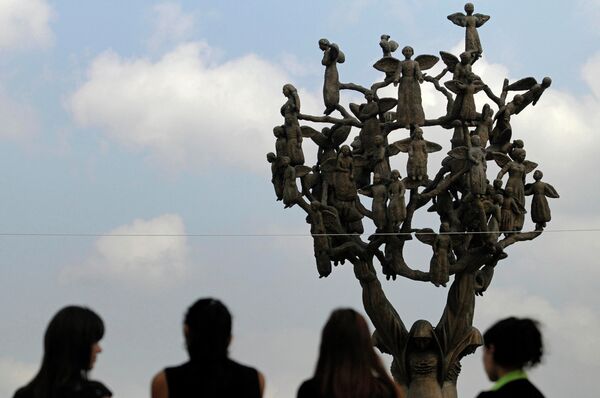 Russia marks on Thursday the seventh anniversary of the start of the Beslan school siege, the second deadliest terrorist attack outside of the Middle East in modern times.

Russia marks on Thursday the seventh anniversary of the start of the Beslan school siege, the second deadliest terrorist attack outside of the Middle East in modern times.

The three-day siege, which ended when special forces stormed the building, claimed the lives of 334 people, more than half of them children. Many others were crippled for life.

Mourners in Beslan and across Russia have been laying flowers and lighting candles in memory of those who died. The names of the dead were read in a ceremony at the school, which has been left unreconstructed as a memorial.

On September 1, 2004, Chechen militants seized school number one in North Ossetia, a small republic in Russia's mainly Muslim North Caucasus region. The first day of September - the Day of Knowledge - is the traditional start of the new academic year in Russia.

The militants arrived in a truck as parents, teachers and children gathered to celebrate the occasion. They quickly herded everyone into the gym, and held more than 1,000 people hostage for three days as they demanded the withdrawal of Russian troops from the nearby republic of Chechnya.

The attack was organized by notorious Chechen militant Shamil Basayev, who died in an explosion in 2006. He was not among the separatists who seized the school.

The hostages were held in the school gym without food or water beneath bombs strung to basketball hoops. A number of male hostages were executed after the school's perimeters had been secured.

The siege came to an end after an explosion rocked the school and Russian special forces moved in. All but one of the terrorists were killed.

After the bloody conclusion to the siege, independent experts and witnesses blamed federal troops for the massive death toll, alleging that force had been employed far too early and excessively. There were also claims that Mi-24 attack helicopters had been used and that some 80% of the victims had been shot by Russian forces during the storming of the school.

A parliamentary commission set up to investigate the tragedy said the explosion that triggered the storming of the building was the result of a militant bomb. Commission member Yury Savelyev had earlier alleged the blasts were caused by federal troops using flamethrowers and grenade launchers to attack the building.

The parliamentary report admitted that flamethrowers and grenade launchers, as well as tanks, had been used, but only on parts of the building where there were no hostages.

Savelyev also suggested that the Kremlin knew of the impending attack three hours before the militants arrived.

The authorities were also criticized for insisting that around 300 hostages had been seized, when the true figure was over three times as many. State media was also slow to report on the attack, a criticism that has been echoed in subsequent years as militants have continued to target civilians throughout Russia.

The attack also had consequences for Russia's political system. Shortly after the end of the siege, then-president Vladimir Putin announced the scrapping of direct elections for regional governors in a bid to strengthen control over the country's provinces. The move was criticized by opposition figures as a step backwards in Russia's democratic development.

Susanna Dudiyeva, who runs the Beslan Mothers' Committee, was part of a delegation that met with President Dmitry Medvedev in June. Medvedev - a former lawyer - said he would use his legal training to examine the official investigation, which is still not complete.

"Three months have passed since Medvedev promised that he would study the documents. The mothers went to the head of an investigation team recently and he said he had received no instructions," Dudiyeva said in an interview with Radio Liberty. "The investigation has basically stopped."

"Several people including children were left with one eye. Time is passing, and new operations are needed," she said. "Many experience a psychological breakdown ahead of the anniversaries."