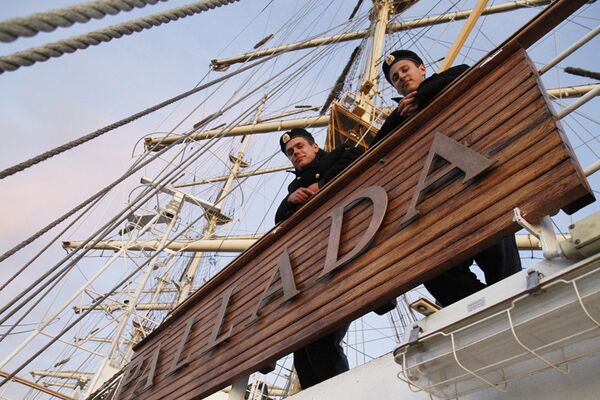 Russia’s sailing vessel Pallada will dock at the port in San Francisco on Saturday morning, a spokesperson for the Far Eastern State Technical Fishing Universit.

Russia’s sailing vessel Pallada will dock at the port in San Francisco on Saturday morning, a spokesperson for the Far Eastern State Technical Fishing University, the ship’s owner, said.

“The vessel will dock at the port in San Francisco on Saturday morning, according to [Russia’s] Far Eastern timeline. The stay of the vessel in the port will last three days,” the spokesman said.

The ship carrying cadets from the Primorye and Kamchatka territories, sailed from Vladivostok on July 1. During the trip, the Pallada is scheduled to call at ports in the United States, Canada and Japan.

In San Francisco, the traditional public days will be held: guests will be able to inspect the ship and see the exhibition featuring the 50th anniversary of Yuri Gagarin’s space flight and the 270th anniversary of the discovery of Russian America by Russian seafarers.

The cadets and crew members will visit historical sites connected with Russian-American history: Russian Hill and Fort Ross, a former Russian settlement in North America. Other scheduled events include a round table on the opening up of America by Russians, a meeting with University of California students and a football (soccer) match between the Pallada and U.S. Coast Guard teams.

The vessel comes to San Francisco from U.S. Seattle. The next port of call will be Los Angeles. The tentative date of arrival there is August 25.

In its 22-year history, the Pallada has sailed for 13 years, called at 101 ports in 35 countries and trained 12,000 cadets, midshipmen and students from all over Russia. Guinness World Records lists the Pallada as the fastest sailing ship in the world. It can reach speeds in excess of 18 knots.