Subscribe
International
India
Africa
In the early hours of August 19, 1991, senior Soviet officials who disagreed with Mikhail Gorbachev’s reforms and the new version of the Union Treaty, set up the State Committee for State of Emergency.

In the early hours of August 19, 1991, senior Soviet officials who disagreed with Mikhail Gorbachev’s reforms and the new version of the Union Treaty, set up the State Committee for State of Emergency. 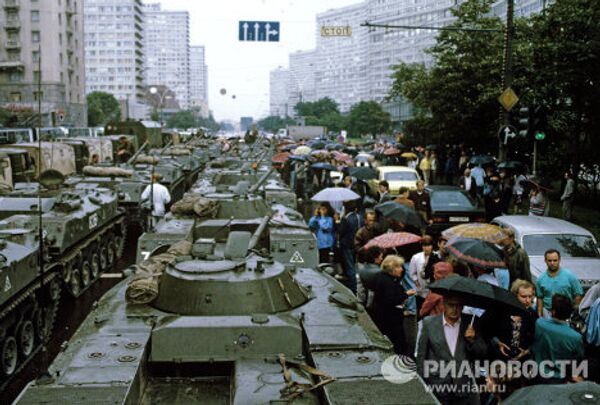 1/12
© RIA Novosti . Vladimir Fedorenko
/
Go to the mediabank
In the early hours of August 19, 1991, senior Soviet officials who disagreed with Mikhail Gorbachev’s reforms and the new version of the Union Treaty, set up the State Committee for State of Emergency. Almost all television channels went off the air. Troops were deployed to major cities. Soviet President Mikhail Gorbachev, at that time on vacation in Crimea, was confined to the government residence in Foros. Photo: tanks on Kalininsky Prospekt (now Novy Arbat), one of Moscow’s central streets. 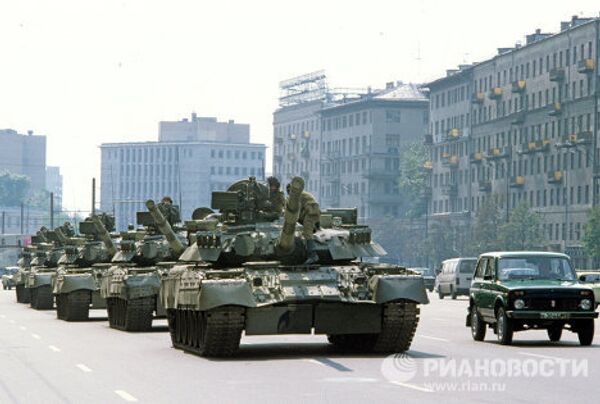 2/12
© RIA Novosti . Sergei Subbotin
/
Go to the mediabank
By 10 a.m. on August 19, troops and military vehicles had secured key positions on the highways leading to the center of Moscow and encircled the Kremlin. 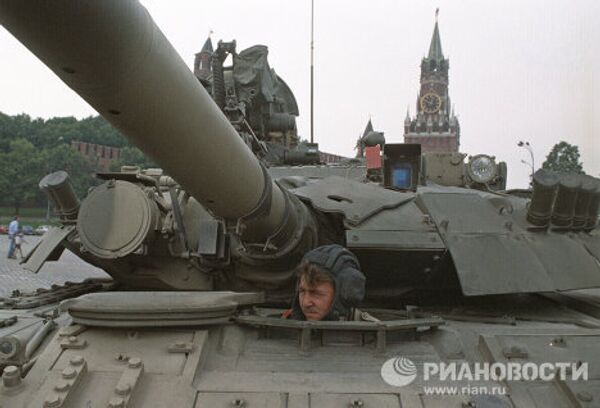 3/12
© RIA Novosti . Vladimir Fedorenko
/
Go to the mediabank
At 11:45 a.m. several dozen tanks approached the House of the Supreme Soviet and the government of the Russian Soviet Federative Socialist Republic (RSFSR) on Krasnopresnenskaya Embankment (the White House). 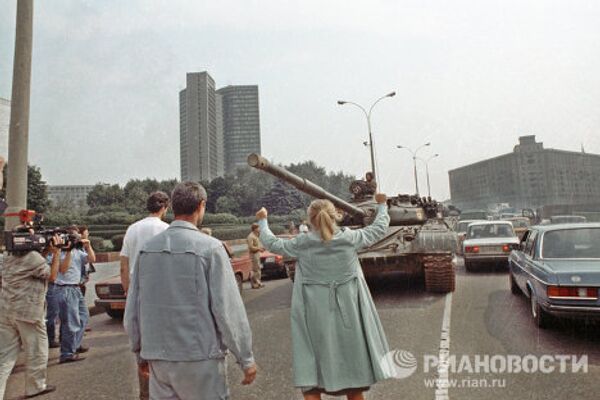 4/12
© RIA Novosti . Fedoseev
/
Go to the mediabank
Civilians answered with mass demonstrations and protests in Moscow, Leningrad (St. Petersburg) and other major cities. Opponents of those attempting the coup wrote an Appeal to Russian citizens, which referred to the events as a “reactionary anti-constitutional coup.” This appeal was sent out to newspapers and news agencies across Russia and the world. Photo: Muscovites blocking military vehicles during the putsch. 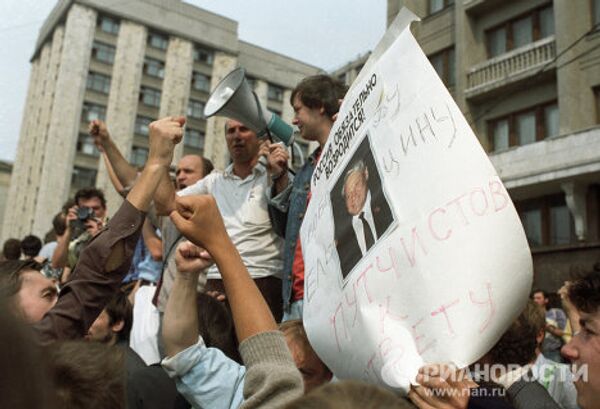 5/12
© RIA Novosti . Sergei Subbotin
/
Go to the mediabank
President of the RSFSR Boris Yeltsin and the Russian leadership headed the resistance in the putsch. Boris Yeltsin, standing on a tank, read out the Appeal to the Russian Citizens, referring to the State Committee for the State of Emergency’s actions as unlawful and called on the country’s citizens “to put up resistance to those leading the putsch and to demand the country is returned to normal constitutional development.” Photo: Muscovites holding a rally at the building of the Soviet Council of Ministers following the declaration of a state of emergency during the putsch. 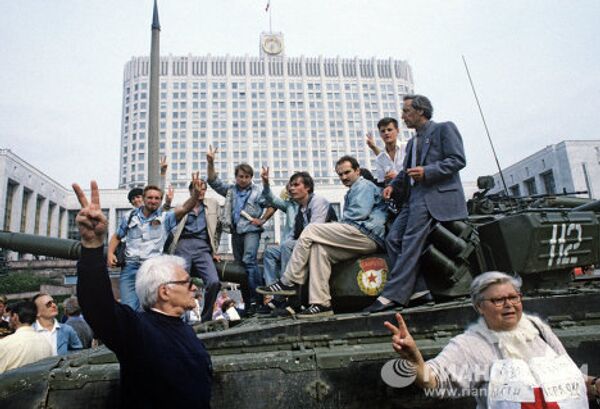 6/12
© RIA Novosti . Fedoseev
/
Go to the mediabank
On August 20, a curfew was declared in Moscow. Groups of volunteers, totaling almost 60,000 people, gathered at the House of Soviets (the White House) to defend the building if government-controlled troops attempted to seize it. 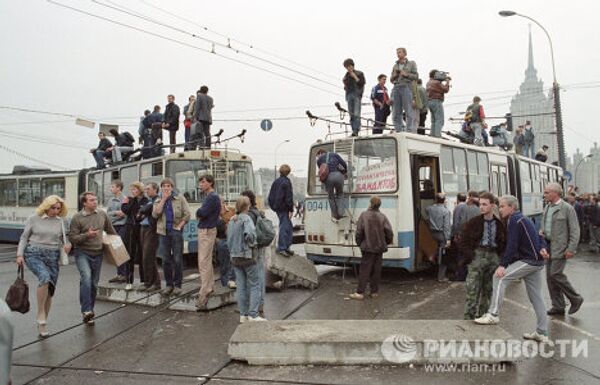 7/12
© RIA Novosti . Igor Mikhalev
/
Go to the mediabank
Muscovites built barricades on roads leading to the building of the Supreme Soviet. 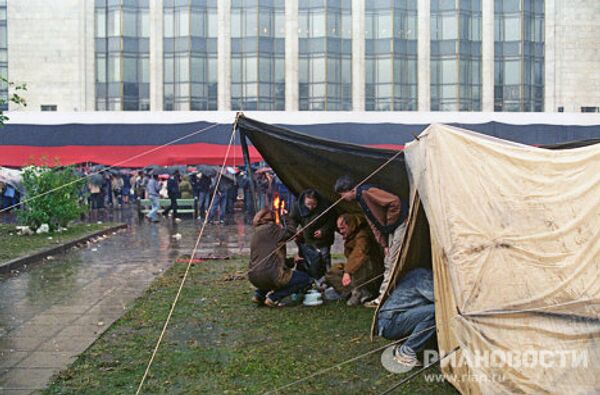 8/12
© RIA Novosti . Alexander Polyakov
/
Go to the mediabank
Those defending the Russian Supreme Soviet building pitched tents and waited for the putsch troops to begin their assault. 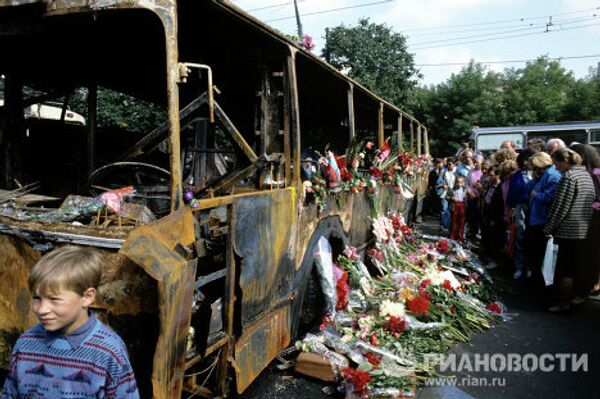 9/12
© RIA Novosti . Vladimir Rodionov
/
Go to the mediabank
At about 1 a.m. on August 21, a column of combat vehicles (tanks) approached the barricades in front of the White House. About 20 vehicles broke through the barricades on Novy Arbat but no assault followed. That night three people were killed as the tanks maneuvered: Dmitry Komar, Vladimir Usov and Ilya Krichevsky. Photo: the site on the Garden Ring, near Tchaikovsky Street, where three young defenders of democracy died in the early hours of August 21, 1991. 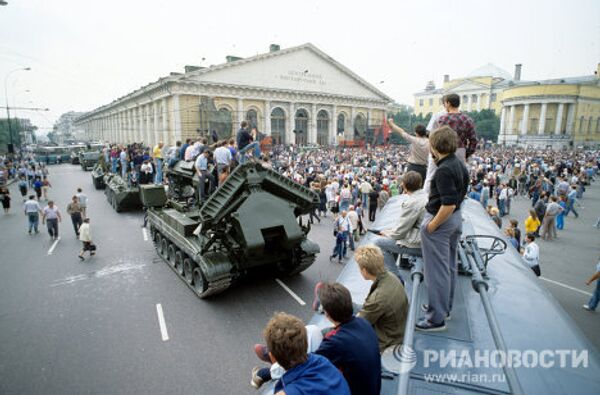 10/12
© RIA Novosti . Alexander Polyakov
/
Go to the mediabank
Early on August 21, troops began to withdraw from Moscow and at 11:30 a.m. an extraordinary session of the Russian Supreme Soviet was held, during which Boris Yeltsin characterized the putsch as anti-constitutional and opposed to democracy. Photo: demonstration on Manezh Square. 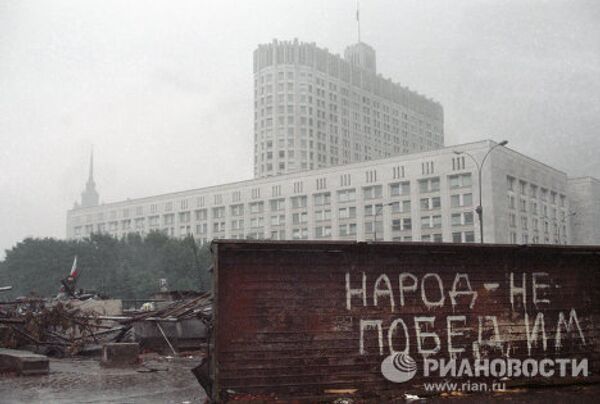 11/12
© RIA Novosti . Alexander Polyakov
/
Go to the mediabank
On that very day, Mikhail Gorbachev made a TV address. In it he confirmed Boris Yeltsin’s position as legitimate. On December 8, 1991, representatives of the RSFSR, Ukraine and Belarus signed a declaration establishing the Commonwealth of Independent States and marking the disintegration of the Soviet Union. The remaining eleven Soviet republics later signed a protocol which formally established the CIS. On December 25, 1991, Mikhail Gorbachev announced his resignation as president of the Soviet Union and signed a decree giving control over the country’s strategic nuclear weapons to Russian President Boris Yeltsin. The Russian white, blue and red flag replaced the Soviet red flag over the Kremlin. 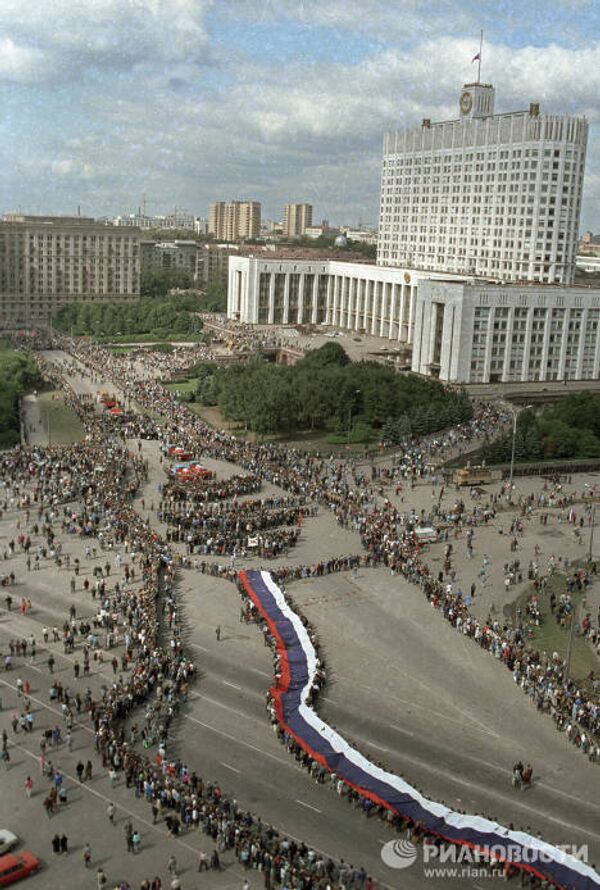 12/12
© RIA Novosti . Boris Babanov
/
Go to the mediabank
Funeral of those killed on August 21, 1991, during the putsch staged by the State Committee for the State of Emergency.