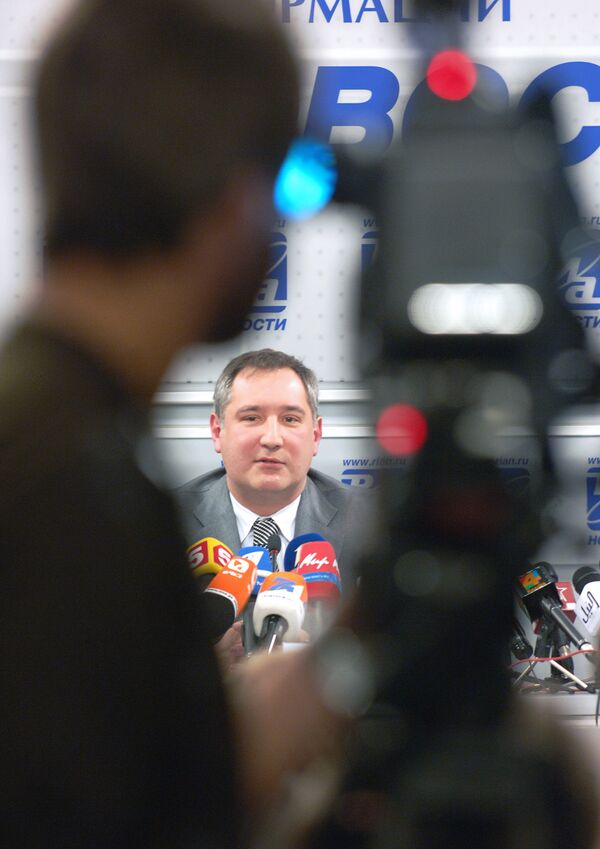 Russia must ensure the protection of its interests in case if radical Republicans come to power in the United States after the upcoming elections, Russian envoy to NATO Dmitry Rogozin said.

Russia must ensure the protection of its interests in case if radical Republicans come to power in the United States after the upcoming elections, Russian envoy to NATO Dmitry Rogozin said.

A Russian delegation has been holding talks on cooperation in building a European missile shield with high-ranking representatives of the White House, the Department of State and the Pentagon since last week.

"It was a very productive meeting because it showed that the alternative to Barack Obama is folding of all cooperation programs between Russia and the United States," Rogozin said in an interview with RIA Novosti.

"I had a feeling that we traveled back several decades, and I was sitting with two 'monsters of Cold War' who looked at me through targeting sights rather than eyes," the diplomat said.

Rogozin said Moscow must take a cautious approach in cooperating with Washington on military and strategic issue so that the sudden change in U.S. politics would not harm Russia's national interests.

"We cannot allow our national security to become dependent on the swinging of the U.S. political pendulum," he said.

The Russian envoy also said missile defense issue will be the real tester of Russian-U.S. relations because it will take political will at the highest level of leadership in both countries to resolve the controversy over the proposed European missile shield.

Russia and NATO agreed to cooperate on the so-called European missile defense system at the Lisbon summit in November 2010. NATO insists there should be two independent systems that exchange information, while Russia favors a joint system with full-scale interoperability.

Russia also demands legally binding guarantees that NATO missile defense systems will not be directed against it.

"The problem that we are facing despite the high professionalism of our negotiators could be resolved only by a powerful political impulse coming from our presidents," Rogozin said, adding that the missile defense issue will be one of the key topics on the agenda of the Russian-U.S. summit scheduled for late fall this year.