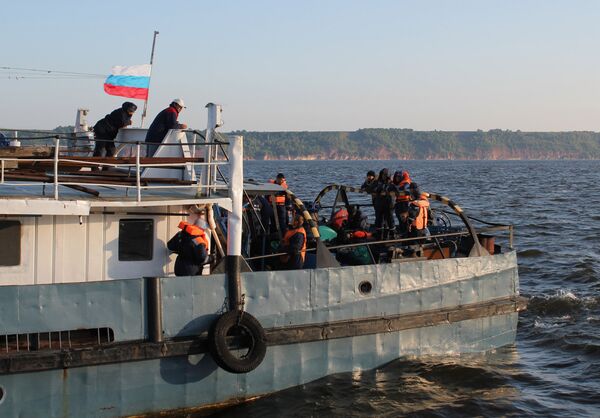 Criminal cases have been opened against the captains of two vessels that did not render aid to the Bulgaria riverboat, which sank in Russia's Volga River, the Russian Investigative Committee said on Tuesday.

Criminal cases have been opened against the captains of two vessels that did not render aid to the Bulgaria riverboat, which sank in Russia's Volga River, the Russian Investigative Committee said on Tuesday.

The latest casualty report says 205 people were onboard when the vessel capsized and sank in under three minutes. The Emergencies Ministry on Tuesday confirmed the death of 88 people, 11 of them children. Of the over 200 on board, 79 were rescued by another passing cruise boat, the remaining are presumed drowned.

The two ships in question are a tug and barge and an oil vessel. The names of the captains were not immediately available.

Several minutes after the Bulgaria overturned and sank, another passenger cruise ship, the Arabella, came to the aid of the survivors and began pulling them on board.

Russian Transport Minister Igor Levitin said on Monday the captains of two passing vessels who failed to come to the aid of the Bulgaria will get "maximum punishment."

"According to preliminary information, at about the same time [the Bulgaria sank], two vessels passed. We know the ships and the captains' names. They are being questioned in the cities where they are presently located. We will use all legal measures in order to give [the captains] the maximum punishment," Levitin said.

An operation to raise the wreck of the Bulgaria will begin on July 16, Emergencies Minister Sergei Shoigu said.

The ship, built in 1955 and renovated 30 years ago, had no license for carrying passengers and had a number of safety faults, including a broken engine and a list to starboard as well as being grossly overloaded.

The operators of the Bulgaria had no permission to provide tour services, Oleg Moseev, spokesman for the Russian Federal Agency for Tourism, Rosturism, said.

Tuesday was declared a nationwide day of mourning and memorial services will be held in all Russian Orthodox churches. Russian TV and radio stations will not broadcast entertainment programs and advertising.

A riverboat similar to the Bulgaria, the Petr Alabin, was detained in Kazan on Tuesday for a safety check and its passengers were taken to the city of Cheboksary by bus, the vessel's operator said.