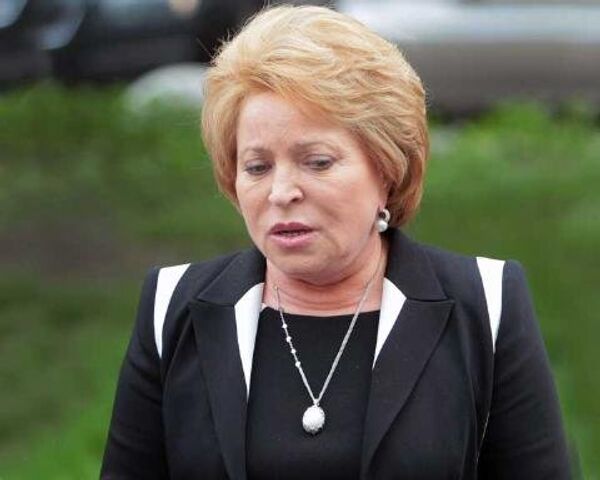 © RIA Novosti Anna Yudina
Subscribe
International
India
Africa
Outgoing St. Petersburg Governor Valentina Matviyenko, who is expected to head the Russian parliament's upper house in the near future, said on Tuesday she was not planning to introduce crucial changes in the Federation Council.

Outgoing St. Petersburg Governor Valentina Matviyenko, who is expected to head the Russian parliament's upper house in the near future, said on Tuesday she was not planning to introduce crucial changes in the Federation Council.

The position of the Federation Council head became vacant in mid-May, when longtime speaker Sergei Mironov, a leader of A Just Russia party, was recalled from the chamber because of his criticism over Matviyenko's governorship. He then became the leader of his party's faction in the lower house of parliament, the State Duma.

Matviyenko was nominated for the job by a provincial governor last week. Russian President Dmitry Medvedev said the country "would benefit" if Matviyenko accepts the post.

"I came to this meeting so that you don't get the impression that I was inflicted upon you," the 62-year-old told the senators. "I will not be able to work effectively if it seems to you that somebody forces you to vote for me," she said.

Russian parliamentary Vice Speaker Svetlana Orlova said last week there was "unanimous support" in the Federation Council for Matviyenko to become its next head.

Matviyenko said she believed a ban on the creation of political factions in the Federation Council should remain in place.

"The Federation Council should not engage in cheap politics," she said. "Protecting regional interests cannot be combined very well with active political work."

Matiyenko also said it was too early to change the system of forming the Federation Council.

"The only thing in the current law that raises my concerns is that the senator is not protected," she said. "If a governor who nominated a senator changes, a Federation Council member should again stand for elections in order to make it into the chamber."

Matviyenko, who has been in office for more than seven years, has faced public criticism for failing to improve the poor state of the city's communal facilities as well as for authorizing plans by Russia's energy giant Gazprom to construct a complex of office buildings dominated by a needle-like skyscraper, derisively dubbed the Gazoscraper, in the northern part of St. Petersburg.

Critics feared that the tower, which was to go up next to the 18th century Smolny Cathedral, may ruin St. Petersburg's unique low-rise skyline. The plan, which prompted fierce public opposition, was abandoned following objections from UNESCO and the Russian president.

Matviyenko will have to seek a seat on a local legislature before standing for the post of upper house speaker.

A speaker for the St. Petersburg legislature said last week that the new St. Petersburg governor may be appointed "as soon as August 24." It is not clear however who will replace Matviyenko as head of Russia's second largest city.