Six Petrozavodsk plane crash survivors to be flown to Moscow 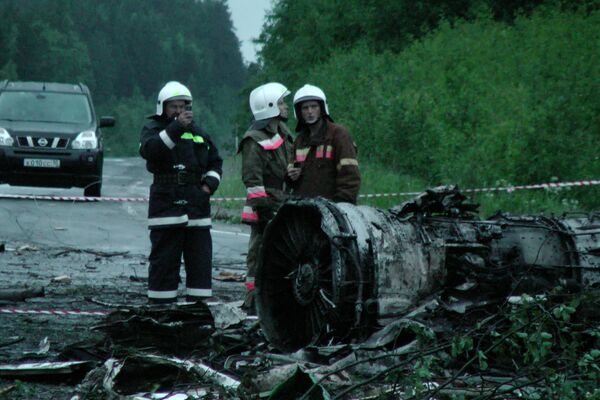 © RIA Novosti . Vladimir Volotovski
/
Go to the mediabank
Subscribe
International
India
Africa
Six of the survivors of the plane crash outside Petrozavodsk in northwestern Russia will be flown to Moscow for further hospital treatment, a Health Ministry official said.

Six of the survivors of the plane crash outside Petrozavodsk in northwestern Russia will be flown to Moscow for further hospital treatment, a Health Ministry official said on Tuesday.

The RusAir Tu-134 crash landed on a highway about a kilometer away from Petrozavodsk's airport. Forty-four of the 52 people on board the plane died. The survivors were taken to hospitals in Petrozavodsk, the capital of the republic of Karelia.

"Health Ministry doctors have completed their examination of the victims. According to preliminary information, six people will be transported to Moscow for further treatment," said Sofia Malyavina, assistant to the health and social development minister.
She added that two patients - a man and a 10-year-old child - were in serious condition, so the decision on moving them to Moscow had not yet been made.

Rossiya 24 news channel reported that the survivors include one child, identified only as Anton. Sergei Goncharov, the head of the Health Ministry's National Center for Disaster Medicine, said the boy was still in an operating theater at the Children's Hospital of the Republic of Karelia, where he had undegone vascular surgery.

The rest of the survivors have also received medical treatment, the official said.

An Emergencies Ministry Il-76 arrived in Petrozavodsk at 06:39 [02:39 GMT] with a group of Centrospas doctors and ministry psychologists. The plane has three mobile units for transporting seriously ill patients.

The RusAir flight left Moscow for Petrozavodsk at 22:30 on Monday. Contact was lost with the plane at 23:40.

Various crash versions are being studied at the moment including a human factor, said Russian Investigative Committee spokesman Vladimir Markin, adding that a criminal case into the crash has been launched.

Rescuers working at the crash site have already discovered both flight recorders from the aircraft.

Tu-134 aircraft entered service in 1967 to become the most widely used airliner in the Soviet Union. It is capable of carrying 76 passengers.