Many killed after passenger aircraft crash lands in Russia's north 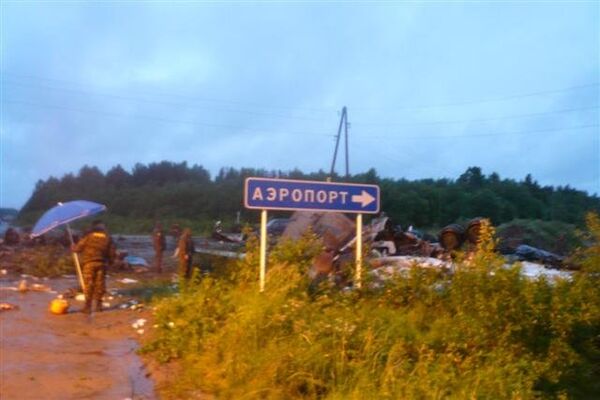 © Photo : The Karelian Emergencies Ministry
Subscribe
Many people were killed and at least eight injured after a Tu-134 passenger aircraft with 43 people on board crash landed in Russia's northern republic of Karelia.

Many people were killed and at least eight injured after a Tu-134 passenger aircraft with 43 people on board crash landed in Russia's northern republic of Karelia, Investigative Committee spokesman Vladimir Markin said on Tuesday.

The plane en route from Moscow to Petrozavodsk crash landed on a highway one kilometer (0.6 miles) away from the airport, where it was scheduled to land at 0.04 Moscow time on Tuesday (20.04 GMT Monday).

"There were 43 passengers, including eight children, on board of the aircraft and five crew members. According to preliminary information many of them died," Markin said but did not specify the number of casualties.

A spokeswoman for the local Emergencies Ministry's department said that eight people, including a child, survived in the crash and were taken to three nearby hospitals.

"There are killed and injured. We are trying to establish how many people were killed in the crash," Oksana Semyonova said.
Irina Adrianova, a spokeswoman for the Russian Emergencies Ministry, said earlier that five people, including a child, were badly injured in the crash and were immediately rushed to a nearby hospital.

She said, the body of the plane fell apart and a fire erupted after it crash landed on the highway.

A Russian Emergencies Ministry's Il-76 aircraft with rescuers and psychologists on board is scheduled to take off from Moscow at 3.00 on Tuesday (23.00 GMT Monday) to Petrozavodsk, she added.