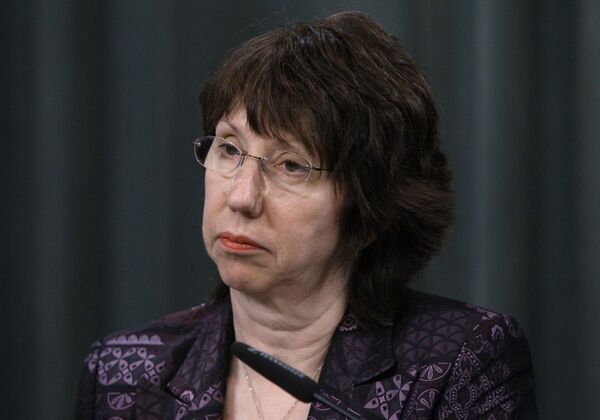 The European Union's foreign policy chief said on Monday she was disappointed by a speech delivered by President Bashar al-Assad of Syria earlier in the day, in which he blamed the unrest in the country on "saboteurs" while promising to go forward with political reforms.

The European Union's foreign policy chief said on Monday she was disappointed by a speech delivered by President Bashar al-Assad of Syria earlier in the day, in which he blamed the unrest in the country on "saboteurs" while promising to go forward with political reforms.

"I have to say at first glance, the speech today was disappointing," Catherine Ashton said during a news conference after a meeting of European Union foreign ministers in Luxemburg.

"President Assad has to launch a credible, genuine and inclusive dialogue, and it's up to the people of Syria to judge the willingness to reform," she said.

In his third address to the nation since a popular uprising against his family's 40-year rule broke out in the country, Assad said armed groups of "saboteurs" had used the peaceful protests as a cover-up for their illegal activities, making government intervention the only solution.

"What is happening today has nothing to do with reform, it has to do with vandalism," he said, adding "there can be no development without stability, and no reform through vandalism."

The embattled Syrian leader said, however, that the announced reforms would create a "new reality and lead to crucial changes" in the country, promising constitutional amendments to ensure a greater level of political freedom in Syria.

After their meeting on Monday, 27 EU foreign ministers issued a statement, saying that the EU "condemns in the strongest terms the worsening violence in Syria." Ashton said the European Union was preparing to expand sanctions against the Assad regime.

The current EU sanctions against Syria include an arms and police equipment embargo, a ban on entrance to the EU of top Syrian officials, including Assad, and a freeze of their European assets.

The EU ministers urged Assad to launch "meaningful political reforms without delay," emphasizing that this was only possible if the Syrian authorities "stop the violence, put an immediate end to arbitrary arrests and intimidations, release all those arrested in connection with protests, as well as other political prisoners who remain in detention despite the recent amnesty."

The ministers also supported a proposal put forward by UN Secretary General Ban Ki-moon to carry out an independent and transparent investigation to establish those guilty of the Syrian bloodshed, which has already claimed some 1,400 lives, according to local human rights groups.

The EU also called those protesting against the Assad regime not to go beyond peaceful demonstrations. Official Syrian reports have said that some 340 security and police officers have been killed in clashes with armed protesters since the beginning of the unrest.

The EU ministers also said they would continue diplomatic efforts "to ensure that the UN Security Council... condemns the ongoing violence and urges the Syrian authorities to meet the legitimate aspirations of the Syrian people," the statement reads.