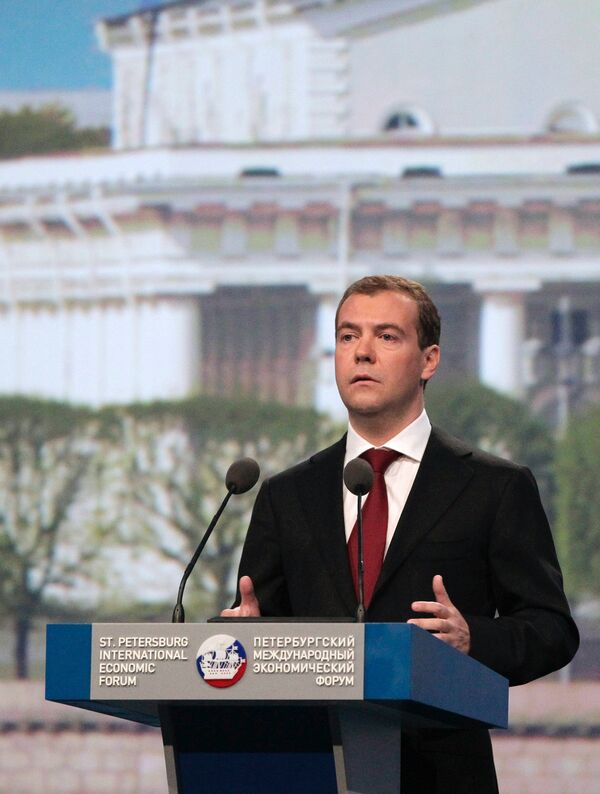 He also said that a system under which everything that happens in the country originates from the Kremlin must be changed.

"It is incorrect to focus on calm, slow growth. It is a mistake. This infamous stability can hide another period of stagnation," Medvedev told the St Petersburg Economic Forum.

"This is why, we must quickly and deliberately change everything which hampers breakthrough development."

Russia's critics say that its economic growth, expected at 4-5 percent this year, is too modest for an emerging country and point to other BRIC states where economies are expanding at around twice that rate. Some of them liken Putin's later years in power to those of Soviet leader Leonid Brezhnev whose reign in the 1970s was marked with economic stagnation.

Medvedev, who faces re-election in March 2012, said that he sought "a serious renovation not only of old economic elements but also of all social agencies."

"Here, not only pin-point changes are needed but systematic decisions. We should not drag our feet on saying goodbye to many bad habits," he said.

"I am sure that this is the most modern policy worthy of Russia. We have enough strength to change the situation significantly in the next few years."

Medvedev said economic growth should improve the quality of life in the next decade. The modern economy Russia needs is associated with healthy people, clean energy, intelligent networks, electronic services, convenient transportation, affordable housing, good education and a friendly environment for all, primarily children, pensioners and the disabled, he said.

"I want to develope an economy of high quality life in the next decade in Russia. An economy which makes life comfortable and interesting. An economy which creates something that helps us be among world leaders," Medvedev said.

"Here we still have a long way to go to get rid of the former system’s legacy, where a distribution mechanism exists for the privileged and minimal risks and rationing make the rest equal in poverty and injustice."

Medvedev said that he was creating a special government group to prepare proposals on how to decentralise government authority, strongly concentrated in Moscow in the 12 years that Putin has been Russia's president and prime minister.

"It is impossible and unnecessary to manage the country from one point," he said.

"Especially, if we are talking of such a country as Russia. I'll go further and say if everything starts working and moving only after a signal from the Kremlin, it means that the system is unviable and if is requires adjustment for one person it means it must be changed."

He also said the country's privatization plan was too modest and ordered the government to expand the sales list by August.