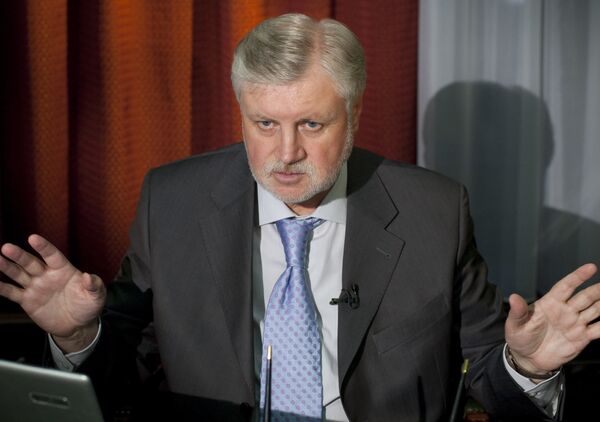 A Just Russia party leader Sergei Mironov, who lost his job as speaker of the upper house of parliament last month, has been elected leader of the party faction in the lower house, a party source said on Tuesday.

A Just Russia party leader Sergei Mironov, who lost his job as speaker of the upper house of parliament last month, has been elected leader of the party faction in the lower house, a party source said on Tuesday.

Mironov vowed on Tuesday to keep up his critical stance on the ruling party - which resulted in his exit from the Federation Council - from his new position in the State Duma.

"United Russia, which thus far dominates parliament, dislikes debate - they dislike it very much when they are asked difficult questions. I promise that I will not keep my questions to myself even if our opponents leave the house when I take the floor, as was the case before," he wrote on his Live Journal blog.

St. Petersburg's legislative assembly, which had nominated Mironov to the Federation Council, voted to recall him on May 18 after he came under fire from the ruling United Russia party for his criticism of St. Petersburg Governor Valentina Matviyenko.

Mironov took a seat in the Duma on Wednesday after Yelena Vtorygina a fellow member of the A Just Russia party, gave up her seat for him.

"I hope that my work in the State Duma will help our voters better understand who is who in Russian politics," Mironov said on his blog, adding that the parliamentary elections in December would radically alter the makeup of the Duma.

"After the December elections, the atmosphere on Okhotny Ryad [where the State Duma is located] will change greatly," he said.

Analysts say Prime Minister Vladimir Putin is concerned that his United Russia party could struggle in the elections, suggesting his creation of the All-Russia People's Front is a bid to head off a potentially damaging poor showing by United Russia.

Putin announced the formation of the People's Front in early May, saying it would broaden United Russia's electoral base with "non-party people," including trade unions, NGOs, business associations and youth groups.

Mironov's break with the Kremlin is seen by some analysts as a move to cast him as an opposition figure who might subsequently head a "controlled opposition" to lend greater legitimacy to next year's presidential elections.