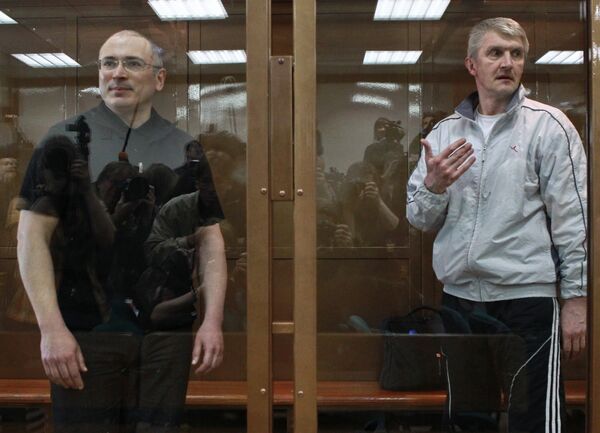 Acting entirely in character, Amnesty International, which incidentally turns 50 on May 28, has declared Mikhail Khodorkovsky and Platon Lebedev "prisoners of conscience."

Acting entirely in character, Amnesty International, which incidentally turns 50 on May 28, has declared Mikhail Khodorkovsky and Platon Lebedev "prisoners of conscience."

Many Russian human rights advocates and opposition members have been calling on Amnesty International (AI) to recognize the former Yukos owners as "prisoners of conscience" since their first trial. The organization has at long last conceded.

Why do people seek this status from organizations like Amnesty International? The recipients are so proud, as if it were a medal.

The higher-ups at AI see nothing wrong in this. They confer the status mostly on public figures and politicians who oppose their governments, which invariably accuse AI of having a political agenda and applying double standards.

Russia has good cause to take offence at AI's decision. The term "prisoner of conscience," introduced 50 years ago by the founder of Amnesty International, British lawyer Peter Benenson, can only be applied to people persecuted for their convictions. However, Khodorkovsky and Lebedev have been sentenced not for their convictions but for economic crimes.

Complaints about procedural irregularities and other shortcomings of the Russian system of justice, which is indeed far from perfect, are common in Russia. You hear them from the lawyers and the advocates of nearly all defendants.

Russia's justice system was sharply criticized during a recent hearing on the murder of lawyer and human rights activist Stanislav Markelov and Anastasia Baburina, a 25-year-old journalist who had been walking alongside Markelov. However, Amnesty International disregarded that criticism and said it was satisfied with the investigation and approved of the verdict.

AI representative Sergei Nikitin said: "The work done on this case by the Investigation Committee and prosecutors has confirmed the authorities' ability to respond effectively to attacks on human rights advocates and journalists. We expect the same approach regarding all other high-profile cases that have been waiting for justice for a long time."

Human rights advocates sometimes turn a blind eye to court violations while at other times seeing problems where there are none, leading to accusations of double standards.

Some are more equal than others

For example, the status "prisoners of conscience" was recently given to Boris Nemtsov, Eduard Limonov and several opposition politicians, who were detained for 10 to 15 days for taking part in an unsanctioned rally and for resisting arrest.

This has put them on the same plane as famous Soviet-era dissidents who were sentenced to long prison terms.

At around the same time, Vladimir Tor, an activist who calls himself a "Russian nationalist," was detained twice and spent a total of 25 days behind bars. But Amnesty International did not label him a prisoner of conscience, even though Nemtsov and Limonov said he was a worthy candidate.

Does this mean that some political prisoners are more equal than others?

Worse still, the status is sometimes granted to Russians who are charged with espionage, like scientist Igor Sutyagin, who was one of the four Russians swapped for ten people accused by the United States of spying for Russia last summer. U.S. and U.K. authorities did not claim they were helping release human rights activists.

Amnesty International has clashed not only with Russia, third world countries and totalitarian regimes, but also with Israel, the United States and many other ostensibly democratic countries. But this has been the organization's purpose since its founding 50 years ago.

AI is an international non-governmental organization whose statute prohibits it from accepting financial assistance from any government. This is how the organization describes itself: "Amnesty International's vision is of a world in which every person enjoys all of the human rights enshrined in the Universal Declaration of Human Rights and other international human rights instruments. In pursuit of this vision, Amnesty International's mission is to undertake research and action focused on preventing and ending grave abuses of these rights."

AI's stated goals are "to defend freedom of expression, to protect women's rights, to abolish the death penalty, to demand justice for crimes against humanity and corporate accountability where companies have abused people's rights."

The organization is working hard toward these goals, but there is one drawback: in the 50 years since its founding, AI has grown into a global human rights network, and its size has become an obstacle to its work.

An organization with a general secretary, an international secretariat and a staff of 500 is a bureaucratic structure, and the purity and idealism of its initial designs inevitably succumb to red tape.

When an organization turns into a kind of a medieval order and becomes drunk on its own self-importance, the mentality of its staff changes. On the other hand, Amnesty International is not an order or a sect, but more like a trade union that does not accept new members easily.

AI will certainly continue to help its charges and uphold their rights, while everyone else will be left to sink or swim.

As such, the status of a political prisoner or "prisoner of conscience," which it confers at its discretion, sometimes looks like those Soviet-era allowances granted only to union members.