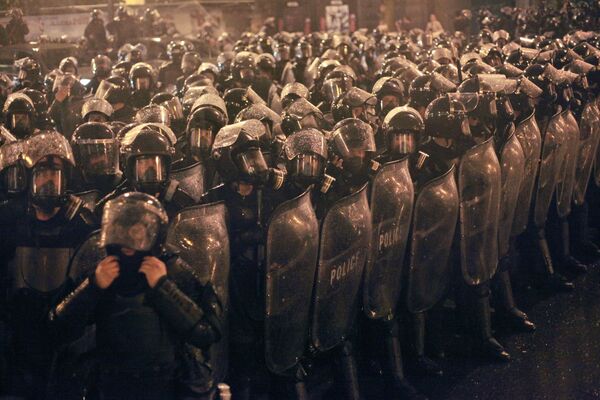 Riot police in the Georgian capital, Tbilisi, beat peaceful demonstrators and should be held to account, Human Rights Watch said on Thursday.

The international human rights group said the Georgian government should launch an immediate and impartial investigation into excessive and disproportionate use of force.

The Interior Ministry said two people, one a former and the other a serving police officer, were killed after being run over by a motorized convoy of opposition leaders fleeing the scene.

A total of 37 people remain hospitalized, eight of them police officers.

"Even if the Tbilisi demonstration was unauthorized, nothing can justify the beating of largely peaceful demonstrators," said Rachel Denber, HRW Europe and Central Asia deputy director. "Police responsible for beating protesters should be held to account."

Georgia is a party to a number of human rights treaties including the European Convention on Human Rights, which imposes obligations on the government to respect the right of freedom of assembly and to refrain in all circumstances from engaging in prohibited ill-treatment of protesters, HRW said.