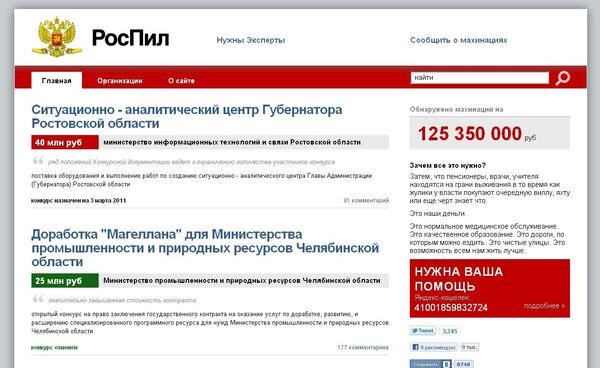 Writing on his Twitter account on Wednesday, Navalny said the probe into the logo had been carried out after a lawsuit brought by Pavel Zyryanov, a deputy of the ruling United Russia party.

Navalny's website monitors allegations of corruption in government tenders. Rospil says it has tracked down $58.4 million in alleged government fraud so far.

In a letter to Prosecutor General Yury Chaika earlier this week, Zyryanov claimed that the website's logo - a two-headed eagle holding a saw in each foot - is a mockery of Russia's official emblem.

The site's name, Rospil, comes from the Russian word "pilit," and is used idiomatically in the sense of "sawing off" funds.

If found guilty, Navalny could be jailed for a year.

Earlier this month, Russia's No. 1 search engine Yandex said that following an official request it had given the country's domestic secret service FSB data on people who used its online payment system to donate to Rospil.

Navalny said the information was then leaked to the fanatical pro-Kremlin youth group Nashi.

Prosecutors last week accused Navalny of "inflicting material damage by means of deceit" when, posing as an advisor to the governor of the central Kirov region, he talked the then-head of the timber firm Kirovles into closing a disadvantageous deal which allegedly lost it $46,839.

Navalny and other Russian bloggers said the allegations were "clumsily made up by the police" to punish him for his exposes of alleged fraud at some of Russia's biggest state firms, including an alleged $4 billion scam by former executives at oil firm Transneft.