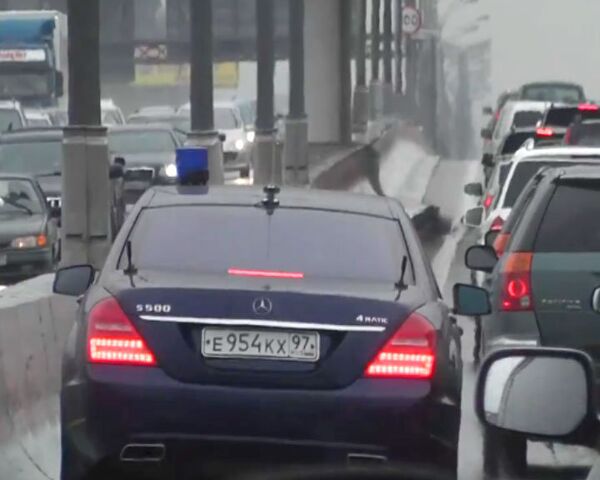 Subscribe
A driver for Russian Emergencies Minister Sergei Shoigu, who last week threatened to shoot a motorist in the head on the Moscow Ring Road, has been fired for his misconduct, ministry spokeswoman Irina Andrianova said on Monday.

A driver for Russian Emergencies Minister Sergei Shoigu, who last week threatened to shoot a motorist in the head on the Moscow Ring Road, has been fired for his misconduct, ministry spokeswoman Irina Andrianova said on Monday.

A video posted on YouTube on Saturday shows a black Mercedes driven by Shoigu's personal driver using a flashing blue light to move through a traffic jam on the Moscow beltway. Shoigu was not in the car at the time.

The Mercedes was trying to pass a car driven by a man who called himself Andrei, a member of the Blue Buckets organization, a grass roots protest group which campaigns against the improper use of flashing lights by officials. Members fix blue buckets to their cars in imitation of the official lights.

When the motorist refused to clear the way for Shoigu's car, the driver snarled through a loud speaker: "You moron, do you want me to shoot you in the head?"

"The driver who showed inappropriate conduct on the road has been dismissed from Russia's Emergencies Ministry after a probe," Andrianova said.

Andrianova earlier told the Izvestia newspaper Shoigu was "upset" by the incident. "The errand was not urgent so there was no need for him to turn on the official lights," she said.

There has been mounting concern over Russian officials' abuse of flashing blue lights, known as migalki, following a number of high-profile road accidents involving VIP vehicles.

Two women were killed last February when their car collided head-on with a Mercedes equipped with migalki belonging to Anatoly Barkov, the vice-president of Russian oil giant LUKoil. No charges were brought despite evidence that the executive's car pulled into the oncoming lane.

In January, a woman was seriously injured after her car collided with Russian presidential envoy Garry Minkh's chauffeured BMW.

The motorist, Andrei, said he would ask prosecutors to investigate the incident. "I plan to turn to the prosecutor's office over the murder threat I received," Andrei, who refused to give his second name, said in a quote on the newsru.com website.