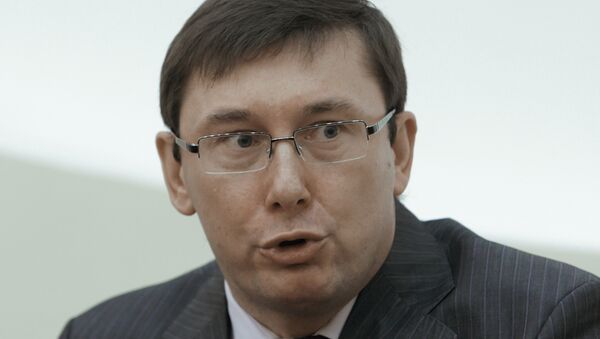 The health condition of the Ukraine's former interior minister, Yury Lutsenko, who was detained for abuse of office last year, and announced a hunger strike late last month, is satisfactory, Ukrainian Prosecutor General's office said in a statement Sunday.

Last month Lutsenko officially informed heads of a prison about his hunger strike.

"Today ... Yury Lutsenko was examined by doctors... and provided appropriate recommendations," the statement said. "They [doctors] concluded that the general state of his health is satisfactory. He does not require forced feeding."

Lutsenko's defense claims that his life and health are threatened. Lawyers also said that Lutsenko is fed forcibly.

Prosecutors charged Lutsenko with abusing his authority while investigating the poisoning of former president Viktor Yushchenko.

Lutsenko, who faces up to 12 years in jail if found guilty, earlier appealed the decision by a Kiev court to sanction his arrest.

Yushchenko was poisoned in the run-up to Ukraine's presidential election in 2004, leaving him with a badly-disfigured face and looking years older.

Yushchenko accused Russia of "attempted murder," but Moscow has denied any involvement.

Tymoshenko, who was ousted as prime minister in a no-confidence vote in March following her narrow defeat to Viktor Yanukovych in last February's presidential election, has been accused of illegally diverting $425 million meant for environmental projects into pension funds and has been questioned on numerous occasions.