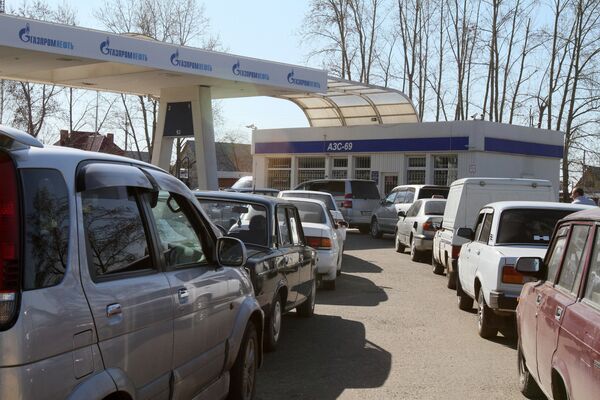 Russian Prime Minister Vladimir Putin on Thursday instructed the Agriculture and Energy ministries to solve the problem with gasoline shortages in the country to ensure the start of spring cultivation.

Russian Prime Minister Vladimir Putin on Thursday instructed the Agriculture and Energy ministries to solve the problem with gasoline shortages in the country to ensure the start of spring cultivation.

The government boosted gasoline export tariffs to nearly 44 percent from May 1 to fight local shortages which started in mid-March in some regions. Russian oil companies prefer to sell gasoline abroad where prices are higher than in Russia, where the state has capped prices.

"I instruct you [Agriculture Ministry] with the Energy Ministry to see what is really happening [with fuel in the regions] and not just on pieces of paper."

Putin cited a statement from the Volgograd and Saratov regions, suffering from gasoline shortages, which says the lack of gasoline is hampering spring cultivation.

The Russian government may take more steps to ensure uninterrupted deliveries of gasoline to the local market, including examining the operation of crude oil trading and gasoline exchanges if it does not see a stable market, Deputy Prime Minister Igor Sechin said on Thursday.

The government believes that the introduction of exchange trade in oil products will help regulate the market and has ordered companies to sell 15 percent of their products via exchanges.

Sechin criticized state-run gas giant Gazprom, which owns an oil refinery, for not participating in the exchange market.

"A lack of work through the exchange creates conditions for setting inappropriate prices, which is why officials from oil refineries, which are not part of vertically integrated companies, are participating in the work of the government commission on their failure to participate in exchange markets today," he said.