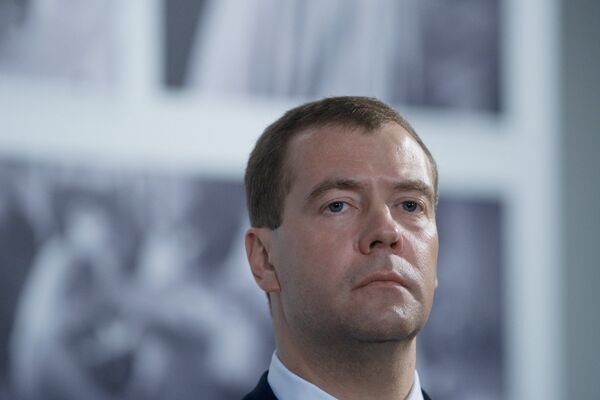 © RIA Novosti . POOL
/
Go to the photo bank
Subscribe
Russian President Dmitry Medvedev and UN Secretary General Ban Ki-moon will discuss international security issues, including the situation in the Middle East and North Africa, nuclear security and sea piracy, during their talks in Moscow on Friday, the Kremlin said.

Russian President Dmitry Medvedev and UN Secretary General Ban Ki-moon will discuss international security issues, including the situation in the Middle East and North Africa, nuclear security and sea piracy, during their talks in Moscow on Friday, the Kremlin said.

Ban arrived on a three-day visit to Russia on Thursday as part of his 15-day tour across Eastern Europe. The Friday talks will be Ban's fourth meeting with Medvedev.

"Russia has been consistently pursuing a strategic course towards the strengthening of the United Nations' leading role in the multipolar system of international relations, giving a full support to the organization in addressing the problems of climate change, sustainable development and food security," the presidential press-service said in a statement.

During the talks, Medvedev and Ban are expected to address the situation in Libya, where forces loyal to Muammar Gaddafi continue their attacks on rebel-held towns after five weeks of allied airstrikes.

Russia has repeatedly called for a diplomatic solution to the conflict, warning against foreign interfering in Libya's internal affairs. Ban has also called for the conflicting sides to declare a ceasefire and begin political dialogue.

Amid rumors that France was pushing EU countries to the ground campaign in Libya by sending an EU humanitarian-military mission to the troubled North African state, Russia has warned western allies against going beyond the provisions of a UN resolution authorizing military action against Gaddafi.

"The implementation of UN resolutions in full compliance with their letter and spirit, without abusing mandates given by the [UN] Security Council, is one of the key issues," the Kremlin's statement said. This position is shared by the leaders of the BRICS bloc of developing countries, comprising Brazil, Russia, India, China and South Africa, which was declared during their summit in China, it said.

Ban is also expected to discuss with Medvedev the issue of security at nuclear power plants, which has been in the focus of international attention since a devastating earthquake and tsunami damaged Japan's Fukushima Nuclear Power Plant, causing a nuclear disaster. Ban has already discussed the issue with foreign leaders during a nuclear security summit in Ukraine on April 19.

Medvedev's aide Arkady Dvorkovich has said the Russian president is going to announce several initiatives aimed at preventing nuclear disasters in the near future. Moscow expects the initiatives to be discussed by leaders of the G8 and G20 countries, he said.

The Russian president and UN secretary general will also address the issue of sea piracy during their talks.

The UN Security Council approved last week a resolution aimed at preventing sea piracy off the coast of Somalia. The resolution, which was initiated by Russia, promises to urgently consider the establishment of specialized courts to consider piracy cases and asks Ban to report back within two months on how to prosecute suspects.

According to the UN, the number of pirate attacks on merchant ships reached 400 in 2010. A total of 790 sailors and crew members were captured by pirates last year. Russia is involved in international anti-piracy operations off the coast of Somalia and in the Gulf of Aden.