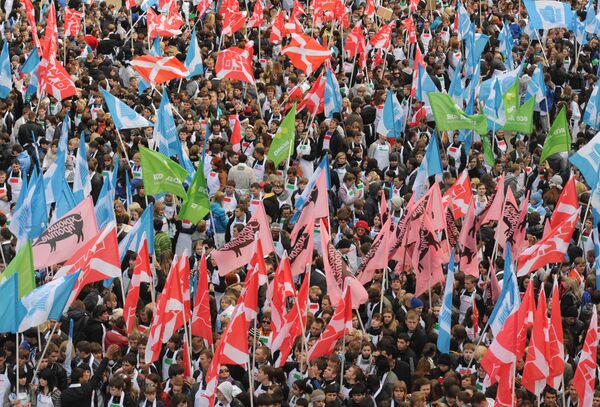 The pro-Kremlin Nashi youth group and the Russian opposition People's Freedom Party both protested against corruption on Saturday, holding separate rallies in Moscow.

Police said the Nashi event brought 50,000 young activists to Sakharov Avenue, named after the physicist and human rights campaigner Andrei Sakharov, north of the city center, while a RIA Novosti correspondent at the opposition rally a couple of miles away said about 1,500 people took part.

At the Nashi demonstration, where the closed-off street was accessible only through a police cordon and metal detectors, the organization's leaders lead the crowd in chants of "No corruption!" and announced the launch of an online campaign to bring corruption to light.

They called on activists to post videos, stories and questions about corruption at  "belye fartuki" meaning white aprons in Russian.

"We believe that we are moving in the right direction and that the questions you pose at the site will fluster many bad people," they told the crowd, many of whom were wearing white aprons.

The website says "it is no secret that almost everyone gives and takes bribes," but says it is for "those who know and are not willing to put up with it."

The young demonstrators - some of whom were dressed as rats - were also invited to join a Stop Corruption campaign that would help members investigate cases of graft.

"Application for membership can be completed right here," said Ilya Kostunov, the director of the state-sponsored Seliger youth camp and a coordinator of the White Aprons project. "Next week we will select the first 100 investigators."

At the opposition protest across the Moscow River from the Kremlin, demonstrators waved little red leaflets listing the demands of People's Freedom Party, which include fair trials, public oversight of law enforcement bodies, direct elections of regional leaders and an end to media censorship.

The stage was flanked by posters reading "Against tyranny! Against corruption!" and "For free and fair elections!"

Police said both demonstrations passed off without major incident.