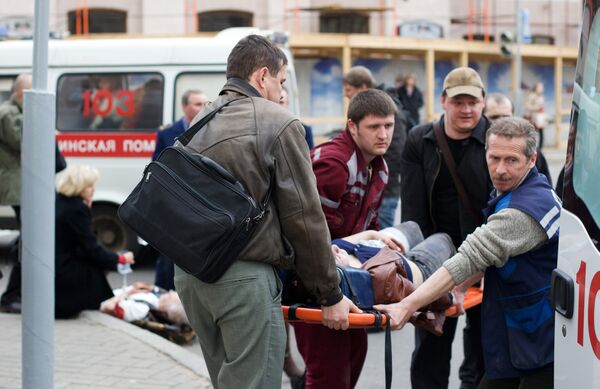 Some 40 people were also hospitalized after the explosion, which occurred at 5:55 pm (14:55 GMT). Police say the explosion happened as a train was standing at the station.

The blast occurred near the residence of Lukashenko, who arrived at the scene shortly afterwards.

At a meeting with officials, Lukashenko called the blast “a serious challenge” to the nation.

“I don’t exclude that this gift could have been brought to us by outsiders. But we have to look at ourselves as well,” he said.

“Who gained by destroying the calm and stability in the country?” he asked. “Who did not like the stability in Belarus?”

He told the KGB – as the country’s security services are still known – to “turn the country upside down” to find those guilty.

There is as yet no information on the cause of the explosion, the first ever in the Minsk metro.

Lukashenko, who has ruled Belarus since 1994, won disputed presidential polls last December Dozens of opposition figures, including political rivals were arrested after violent protests in Minsk following the announcement of the result.

While Belarus has been largely free of the terrorist violence that has plagued neighboring Russia, some 50 people were injured in July 2008 when a bomb went off at an independence day concert that Lukashenko was attending.