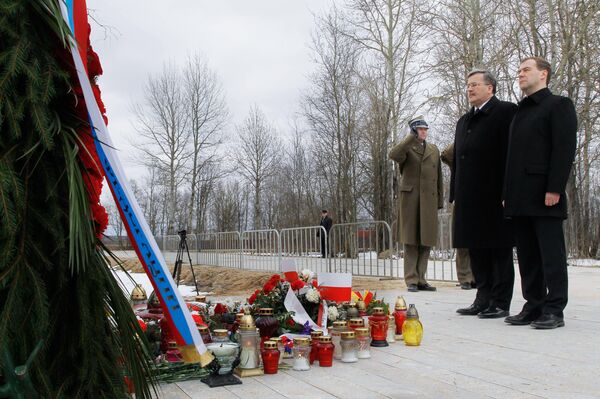 © RIA Novosti . Vladimir Rodionov
/
Go to the photo bank
Subscribe
Russian President Dmitry Medvedev and his Polish counterpart Bronislaw Komorowski paid a visit on Monday to the site of the plane crash that killed Polish leader Lech Kaczynski and 95 other people last year.

Russian President Dmitry Medvedev and his Polish counterpart Bronislaw Komorowski paid a visit on Monday to the site of the plane crash that killed Polish leader Lech Kaczynski and 95 other people last year.

The two presidents observed a minute’s silence for the victims of the April 10, 2010 disaster and tied ribbons to wreaths in the ceremony near the western Russian city of Smolensk.

The presidential plane came down in heavy fog as it attempted to deliver Kaczynski and a host of other top officials to mark the 70th anniversary of the 1940 massacre of thousands of Polish officers by Soviet secret police. The subsequent outpouring of grief in both countries did much to bring Poland and Russia together after years of simmering tension.

But the ceremony threatened to see a new dispute break out over the replacement of a Polish-language plaque that said Kaczynski was on his way to a ceremony to mark the “70th anniversary of the Soviet genocide of Polish servicemen and officers” in nearby Katyn and other locations. The new version is in both Russia and Polish and makes no mention of the Katyn killings.

Medvedev told journalists on Monday after talks that a Russian-Polish committee would be set up to create a memorial and that both he and Komorowski would “support the project.”

The Russian leader also reiterated that the Soviet leadership of the 1940s was guilty of the Katyn massacre and slammed attempts to rewrite history.

“The leaders of the Soviet state of this period bear the blame for this crime,” he told journalists, adding that attempts to present other versions had no basis in “history” or “morality.”

Medvedev also pledged to send Poland the remaining documents on last year’s crash. Poland has said that its pilots and crew were largely to blame for the disaster, but believes Russian air traffic controllers could have been more strident in their warnings that the weather was unsuitable for a landing.

Komorowski said the total declassification of the documents was essential. “In order to close this chapter, it has to be read to the end,” he said.