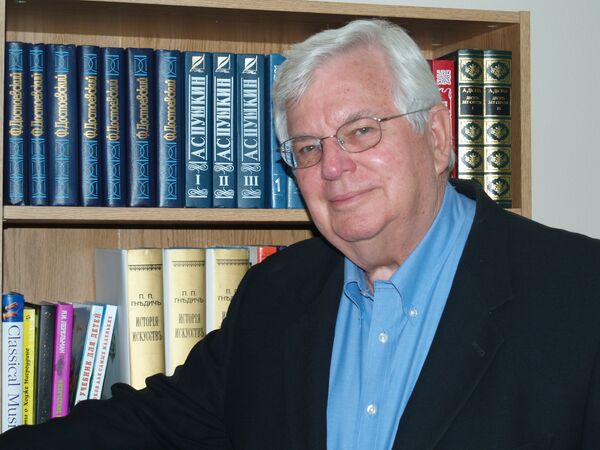 © Photo : Masha Simonian
Subscribe
International
India
Africa
My name is Dog. I sit in the doorway to my apartment building, dripping in the cold November rain, slowly looking up and down the street. Down and up the street. Nobody notices me. Just as well.

My name is Dog. I sit in the doorway to my apartment building, dripping in the cold November rain, slowly looking up and down the street. Down and up the street. Nobody notices me. Just as well.

I live in Moscow, Panfilowsky Pereulok 5, Apartment 41. It is a short street with only two apartment houses. Across the street is a small park where children play.

At the end of my street is Protyochnyi Pereulok where tanks trundled down to the White House one summer. At the other end is a larger park, and it is what happens in that park that affects my life more than anything.

Across the park is Novy Arbat. Do you think a dog does not know the important streets in Moscow? Do you think I am from a cold northern village beyond the Volga? I am not much of a dog, but I do live in Moscow.

I have never been across Novy Arbat. It is always filled with cars going very fast and overloaded busses going very slowly. Big black cars with flashing lights speed down the street sometimes. I saw that once when I went up to the edge of Novy Arbat. They have their problems, and I have mine. But I don't visit Novy Arbat often because I would have to cross The Park.

I am not an ordinary dog in Moscow, I should tell you that right now. I am not an aristocrat. I think all the other dogs in Moscow are aristocrats. I know. I watch them in The Park where they take their masters twice a day. These aristocratic dogs meet and sniff each other’s private parts and play and have fun. They run after each other in the snow and chase sticks and do other exciting things that the nobility do.

How do I know they are aristocrats? It’s their airs. They hold themselves to be something special. They have leashes and masters at the end of them who obediently follow them to The Park twice each day, so they can drop their loads, pee on the trees, and sniff each other. They are healthy and well-fed. They look fat and so do their masters. Some even have sweaters.

And they all know who they are—they are handsome German Shepherds, elegant Afghans, cute Shih Tsues, powerful Great Danes, beautiful Collies, pampered Poodles, and slobbering Bulldogs. They have elegant and proper names, like Prince, Katerina, Champion, Nicholas, Sasha, and Victor Petrovich. There is a Russian Wolf Hound called Alexander Nevsky and a German Shepherd called Beethoven. My name is Dog.

They all have papers. Even the dogs in Russia have to have papers. Only the dog's papers really mean something. I am not sure what! Maybe it's that they don't have worms—unlike me. I have worms. My only papers are the old copies of Pravda I sleep on, when I am lucky enough to be let into the apartment. I do not know who my parents are, that's why I don't have papers. I like to think my father was a Russian Wolf Hound, but I am little, so maybe my mother was a fox terrier. It doesn't matter.

My name is Dog! Even to spell it with a capital letter was my own idea. My master calls me other things, bad things at times. Mostly he calls me "Get out!"

I am a mutt! I am small and my head is too big. My hair is frazzled and filthy. I have never had a bath, and in that I have something in common with some other Russians, judging from my master's friends. I looked in a mirror once—never again.

My Master's name is Gregori and his wife is Lena and they are both drunks. Every morning he goes to the beer kiosk on 1st Smolensky pereulok and gets his two-liter plastic Pepsi bottle filled with beer and comes home, and that's it for the day. While he sleeps I sit outside and things are OK then.

And then he awakes! Bad mood! Always a bad mood! Has to reassert his manhood. Kick the Dog! You can always tell a weak man by the way he treats animals. Lena, ¬she really does not drink as much and is usually awake during the day. She works in a food store and brings home meat she has stolen—that is the only advantage of living here. She grumbles and talks on the phone when she does not go to work.

The door to the building is always part open, even in winter. It has a latch and a lock, but there is also a big hole in the door so anyone can reach inside and unlock it. So it stands part open, and I sit in the space and watch the world go by, or at least what I can see of it.

What I see makes me feel bad. It is not the weather, the cold rain, or being locked out without food on a cold night. Every Russian chances that. It is that I have no papers ¬and no status. I have no master to take walking on the end of a leash. Even a Minister has to get home before a certain time to take his dog to the park. That's what they do in The Park. The dogs rule. It’s the only thing even a Minister can count on—his dog has to pee and poop.

I have no status in life; I am constantly reminded of this. Where do I do my toilet? Not in The Park, but against the wall of the apartment or in the street. In the winter I sit on the edge of The Park and watch the children slide down a small slope. They don't seem to mind me watching them and are kind to me. The winter is more fun. The ice forms by the front door because the rain pipe was bent and drains the water onto the front step where it freezes in a big hill of ice. So people slip and fall. My master falls when he is drunk and tries to push in the door when he should pull—that is why there is a big hole in it. He falls all over the front step, and I watch and laugh. You think a dog doesn't laugh? Think again. When he looks my way and calls me names, I look the other way. Not my responsibility. Who does he think I am—a German Shepherd?

Even the aristocratic dogs got a jolt of reality recently. There was a war on. Dirty men with mean faces were shooting guns at the police on Novy Arbat. They built fires and stood around all night in The Park. The dogs and their rich masters did not come out. But do you think that scared me? Not a bit. I did my usual thing. I watched them run back and forth. Forth and back.

I went up to The Park and watched from behind a tree. Even when the tanks fired at the big white building, I only flinched. But no rich dogs to be seen in The Park that day.

It is November and it is raining again. I stand in the door and watch people and other dogs go to and fro, fro and to. There is a foreigner in a black coat who looks at me and sometimes stops and whistles for me to come. Is he crazy? Doesn't he know we can't trust foreigners? I look the other way. The water drops from my scraggly eyebrows.

I sit and watch and drip.