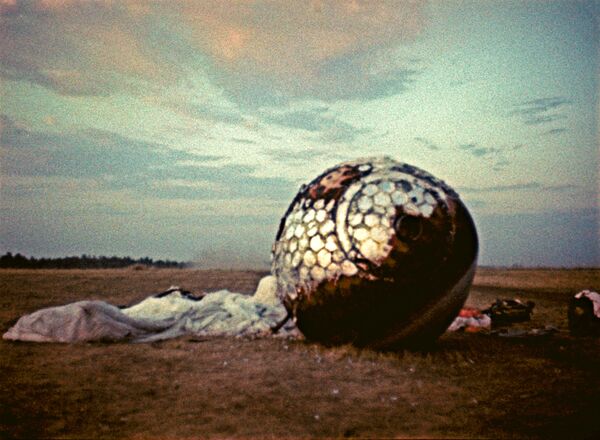 © RIA Novosti . RIA Novosti
/
Go to the photo bank
Subscribe
Ordinary Russians see little connection between space exploration and economics. If anything, they see expensive space programs as a permanent drain on the nation’s resources. Some are inclined to take it personally, as if the dark vacuum of space somehow sucked the money right out of their pockets.

Ordinary Russians see little connection between space exploration and economics. If anything, they see expensive space programs as a permanent drain on the nation’s resources. Some are inclined to take it personally, as if the dark vacuum of space somehow sucked the money right out of their pockets.

Space is beyond the realm of the rational and, therefore, beyond the realm of economics. But Russia’s space program was built, in part, by ordinary Russians using ordinary steel. Space exploration was considered a national priority in the Soviet Union, with the funding to match. Elaborate production chains were set up, the necessary infrastructure was built, and state-of-the-art technologies were developed virtually from scratch. Aerospace specialists were paid stable salaries and received good housing, both of which were in short supply in the command economy of the Soviet Union. But it wasn’t just about the money for them. By their own account, they worked to experience the thrill of creative endeavor and to feel a sense of confidence about the future.

Three megaprojects, in particular, made an enormous contribution to the development of Soviet production and technical expertise. They were the three horses that pulled the Soviet troika into the future.

By the late 1940s, thirty years had passed since the Bolsheviks took power and set about transforming a largely agrarian country into an industrial power. Moreover, the Soviet Union had just emerged victorious from the most destructive war in history. But the three horses of the Soviet troika galloped ahead so fast that here was hardly any time to stop and admire the results. Enormous challenges were laid before Soviet scientists, and they proved themselves up to the task.

The existence of nuclear physicists in the Soviet Union was an open secret, but no one knew about the missile-defense specialists who had worked in secret since the 1950s until the collapse of the Soviet Union. In recent years, publications about their herculean efforts have begun to appear.
The Soviet space program symbolized the victory of brains and willpower over a seemingly insurmountable legacy of technical and economic backwardness under the tsars.

Last train to the sky

The Soviet space program was immensely popular. People followed news of new launches with rapt attention. Cosmonauts could not go anywhere without being recognized. Rocket and spacecraft designers were supposed to keep a low profile and inhabit their own private world. They even used pseudonyms to join the Soviet Academy of Sciences.

But the results of their work were hard not to notice. They merged technologies and established production chains at countless plants, research institutes, design bureaus and scientific associations. Affiliated companies sprung up all across the nation, from the Baltic republics to Russia’s Far East. Leading research and production facilities came and went, establishing various co-production arrangements in their own interests. Enterprises were built and commissioned, matter-of-factly manufacturing products unheard of only five years ago.

The government lavished money on the space industry. In return, it was supposed to stun the world with tangible results, regardless of the price.
As the years went by, this young and vibrant industry grew ossified. Its intellectual centers were covered over with a crust of “specialized agencies.” These centers fenced themselves off from rivals with “planned research subjects” and fancy titles like “lead project manager.” Designers were given state awards and prizes, while rank-and-file employees were rewarded with quarterly and annual bonuses. Intrigues were commonplace, causing heart attacks for the people involved. The entire design and production process involved hundreds of thousands of people operating machine-tools and working at drawing boards for decades on end. Everything changed, except that the Soviet state invariably paid for results, allowing people to devote themselves entirely to their work.

Anatoly Basistov, the father of the A-135 missile-defense system around Moscow, rebelled against the bureaucratic logic of the late 1970s. At the time, the general contractor was expected to request the maximum possible resources for its subordinate science-and-production agencies. Basistov told the Soviet leadership that he was unable to develop a system that would completely shield Moscow from nuclear warheads. Basistov was horrified to realize that if he said he could do it, the Politburo would provide him with however many billions from the budget, without giving second thought to what else the money could be used for.

Rocket-and-missile experts, radio electronic system designers and nuclear physicists lived in a world of unlimited responsibility for unlimited results, to be obtained using limited resources and under tough deadlines. They lived that way for decades, growing accustomed to walls separating them from the rest of the country. It would be blasphemy to say that they lived and worked in ideal conditions. It would be double blasphemy to claim that they did not realize that such work deprived the entire nation of something highly important. And it would be naïve to believe that this situation could continue indefinitely.

Much has already been said about the economic implications of the U.S. space program. There is no need to go into details here. Suffice it to recall Teflon and Velcro, which became household names. Both were by-products of the Apollo lunar program. The Soviet Union, in contrast, was capable of coming up with fantastic engineering solutions but cared little about their consumer value and possible civilian applications.

The Soviet Union turned its hi-tech industry into a deadly “blade” to accomplish just one objective. But the “blade” did not always serve as the extension of the economic “hand,” except when it was needed to create another defense-industry miracle.

Its capacity for working miracles disappeared in the 1990s when the colossal monolith crumbled along with the system that had spawned it, leaving a sea of bitterness and grudges in its wake, as well as nostalgia for a lost paradise for engineers and technicians.

Imagine the shock when two or three generations of specialists, who were convinced that that they are the best of the best in the most advanced fields, suddenly see their situation change 180 degrees overnight.

After Russia embarked on the road to a market economy, these specialists were told that the country no longer needed their work, that too much had already been spent on them. They were also told that they had to adapt to the market system in the next five years, including by selling their products wherever they could.

You can turn a blind eye to technology, but you can’t abolish it completely. In 1993, the national aerospace industry asserted itself on the commercial space-launch market. It took the industry a lot of time and effort to adapt to the realities of the market economy, losing human resources, production facilities, experience, knowledge and hope in the process.

These strong and proud people had flown too close to the Sun, or rather they had brought the Sun too close to their pedestrian and sinful fellow humans. The fall of the aerospace industry was cruelly sobering after several decades of intoxication with the limitless possibilities afforded under the Soviet space program.

The seeds of the Soviet space industry’s tragic downfall had been sown in its very creation. It could not have been otherwise. Without those fatal flaws it would have never emerged, and would have failed to accomplish all those stunning feats that won respect world over.
Even the Soviet Union, with its supposedly developed socialist society, could not escape the Darwinist dialectic. Highly specialized “species” are unavoidably doomed to a bright, albeit brief, existence when the environment to which they were so perfectly adapted vanishes in an instant.