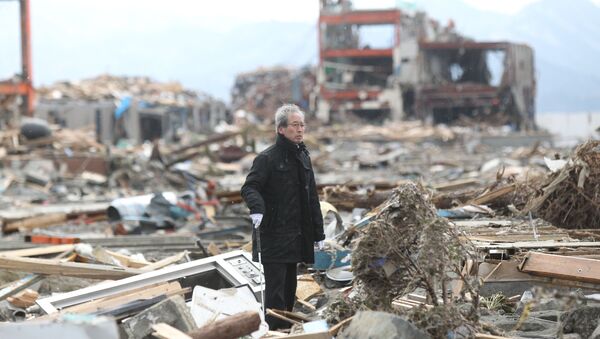 A devastating earthquake and tsunami struck northeast Japan on March 11 and the threat of a nuclear disaster has been looming over the country ever since. Amazingly, the Japanese people have retained their composure, trying to help each other out whenever possible.

A devastating earthquake and tsunami struck northeast Japan on March 11 and the threat of a nuclear disaster has been looming over the country ever since. Amazingly, the Japanese people have retained their composure, trying to help each other out whenever possible. Shopkeepers have cut prices on staple goods and shoppers line up patiently to pay, without bickering or trying to queue jump. They know they are all in the same boat, and no one wants to lose either self-respect or that of the community. Those lucky few whose houses were left unscathed by the disaster offer refuge to their homeless neighbors, and fundraising campaigns have been launched across the country to support stranded pets.

“I cannot do otherwise”

People in Japan realize only too well that the only way of getting through these hard times is by sticking together. “Tomorrow my father is heading off to the Fukushima plant. He’s taken six months off. I was about to burst into tears when I learned he had volunteered to help there. ‘What we do now is crucial to the plant’s future. And I simply cannot do otherwise,’ he explained. I wouldn’t describe my Dad as a family man who you could always rely on at home, but I’ve never felt as proud of him as I do today. We’re praying for him to come home safe and sound,” Namico Aoto wrote in her Twitter blog.

“Sensei, come back!” This is the opening line of an article in the Asahi newspaper about a 29-year-old school teacher, Motoko Onodera, listed as missing in Rikuzentakata, in northeast Japan’s Iwate Prefecture. The woman’s husband, students and colleagues are calling out for her to return.

When the tsunami alarm went off at Motoko’s school on March 11, most of the students took refuge in a protected area in the backyard. But ten children were training in a swimming pool 500 meters away from the school compound. Motoko rushed to fetch them. But as she drove off, a huge tsunami wave broke through the dam and into the city, destroying coastal buildings in its way. The woman and the ten kids she went to rescue are all missing.

“That’s just the way she is,” Asahi quotes Motoko’s husband as saying. “She cares more about others than herself.”

They met three years ago when they were both working at the same school. The couple built good relations with colleagues and students alike, and often had them over to their place.

March 11 began just like a regular day, with Motoko preparing a lunchbox, known in Japan as bento. When her husband said she didn’t really need to spend all that time on it, she smiled and replied, “I’ll just pack the food.”

Motoko’s husband has been driving around refugee camps and hospitals to find her. There is no news so far and his car is running low on gas. March 28 will mark the first anniversary of their wedding.

“She’s the best,” he says with a smile, holding back his tears. “But she’ll really catch hell once she’s back home – she’s made me worry so much!”

“Motoko asked for leave next year,” the school principal says. “She must be pregnant. We’ll give her everything she needs; we just want her to return.”

Elsewhere, Japanese journalists filmed and posted a heart-wrenching video about a pet dog who lost his owners to the tsunami and nursed another dog, injured by the debris. The video, entitled “Ultimate Loyalty,” has become an instant YouTube hit: more than 50,000 people have watched it so far.

The film shows a grimy, exhausted pedigree dog wandering about his wounded friend. He tries to draw the cameraman’s attention to the other dog, lying motionless in the wreckage, and puts a paw around his friend’s neck in a consoling gesture.

The filmmakers reassure the viewer that both dogs have now been rescued; one has been taken to a pound and the other to a veterinary hospital. Many viewers have already come forward and said they’re willing to adopt them.

“Feel free to use our bath”

Many Japanese users are now sharing their quake-related experiences with the outside world on Twitter and other social networking sites.

“One small boy is waiting in line in a food store. He holds a packet of biscuits in one hand and cash in the other. When it’s his turn to pay, he hesitates for a second, then gives the biscuits to the cashier, and puts his money into a donation box. The cashier, moved to tears, thanks the boy in a trembling voice.” @matsugen

“A boy goes up to a train engineer and says, ‘Thank you for continuing to operate the train.’ I see tears welling up in his eyes. I can feel tears in mine.” @oka_0829

“It took me four hours to get home. Crossing the road I saw a woman holding a sign that read, ‘Feel free to use our bath.’ Japan is the world’s most sympathetic nation. I cannot stop crying.” @fujifumi