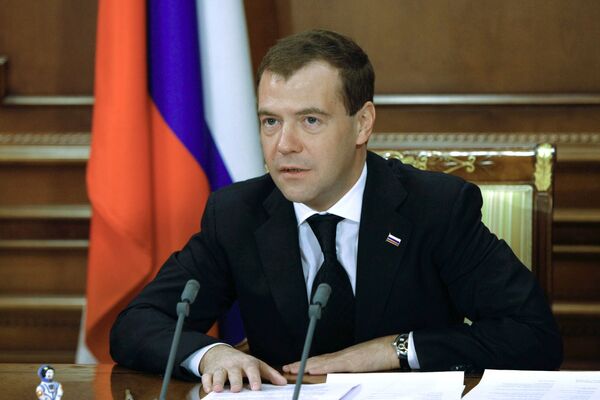 Any military intervention in Libya may trigger a war, Russian President Dmitry Medvedev said on Wednesday.

His statement came after the G8 agreed to implement further measures against the Libyan leadership, including possible military actions.

Fierce clashes between Libyan rebels and Libyan strongman Muammar Gaddafi's supporters have been raging in the country since mid-February, claiming thousands of lives.

"We realize what a ground military operation is. Ground intervention is likely to mark the start of war. Not a civil war, but a war with the international troops," Medvedev said, adding that such a serious issue should be thoroughly considered by the UN Security Council.

The president reiterated Russia's stance against any escalation in the violence.

The Arab League voted on Saturday to ask the UN Security Council to implement a no-fly zone over Libya. Libyan rebels themselves have also called for a no-fly zone. They have also urged Western countries to carry out military strikes against pro-Gaddafi forces.

NATO Secretary General Anders Fogh Rasmussen has repeatedly said that the alliance was considering various options against Libya, including possible military action, but said any intervention in Libya would be strictly in line with UN Security Council decisions.