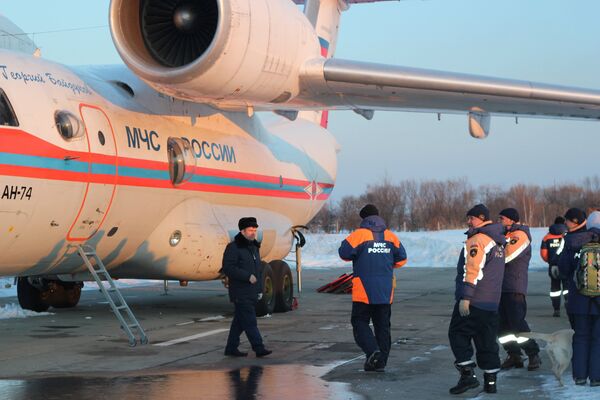 Andrianova said an Ilyushin Il-76 Candid airlifter with 8,600 blankets weighing over 17 metric tons on board will depart Tuesday evening.

"Today the Japanese side asked Russia for 10,000 blankets and 10,000 mattresses. Russian Emergencies Ministry flights will deliver the required humanitarian cargo to Japan," she said.

Large parts of eastern Japan were left devastated after a 9.0-magnitude earthquake struck off the coast on Friday, sparking a powerful tsunami. It was followed by aftershocks that have since caused blasts at the Fukushima nuclear power plant in the country's east, raising fears of a nuclear meltdown.

Over 10,000 people are reported dead or missing in Japan following the disasters. A death toll of 2,500 has so far been confirmed.

The Russian specialists have been dispatched to Japan to help the country's authorities in a rescue operation in the aftermath of Friday's tragedy and manage the situation at the Fukushima plant.

The Russian experts, who have already arrived in Russia's Far Eastern city of Khabarovsk, are now waiting for permission from the Japanese authorities to fly to Tokyo.

"We hope for [your] assistance so that our rescuers can arrive in Japan in the next few hours," Shoigu told Kono during a meeting in Moscow.

The specialists sent to Japan are nuclear experts who have experience in the clean-up of the Chernobyl nuclear disaster in Ukraine in 1986, the Russian minister said.

A group of 80 Russian rescuers are already working in the city of Sendai.