Sudan to split in two 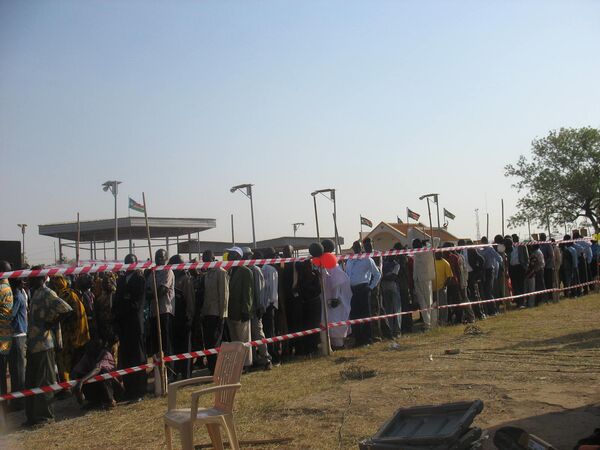 © RIA Novosti . Juliya Troitskaya
Subscribe
Official results of Southern Sudan's referendum on independence from the north, held from January 9 to 15, will not be released until next month, but that didn't stop leading international observers from declaring the referendum a complete success and calling the election free and fair as soon as the last vote was cast.

Official results of Southern Sudan's referendum on independence from the north, held from January 9 to 15, will not be released until next month, but that didn't stop leading international observers from declaring the referendum a complete success and calling the election free and fair as soon as the last vote was cast.

It's odd to hear such rapid-fire assessments coming out of one of the poorest countries in Africa, a country almost devoid of infrastructure (from roads to telephones and Internet), industry, literacy, and other basic elements of modern civilization.

In these turbulent times we have seen many miracles of "law and order" in regions blighted by decades of civil war, revolts and massacres, such as Kosovo. But the grim episodes in Sudan's history stand in stark relief against the largely peaceful and orderly election process. Election monitors, including the EU mission, representatives of the Carter Center and former President Jimmy Carter himself, have called the referendum credible and well organized.

According to the terms of the referendum, the 10 southern states may form a new nation if turnout is at least 60% (actual turnout among the 8 million southerners was closer to 80%) and over 50% of them vote for independence from the wealthier, Arabic-speaking, Muslim north.

According to observers, in some regions up to 90% of people support independence, so the official results will only confirm what we already know.

What will come next is still anyone's guess, but we do know how Sudan arrived at this point. Sudan's former colonial masters and the two Cold War superpowers, along with the Sudanese themselves, are the reason the largest country in Africa will soon split in two nations with large economic, demographic and religious differences. With weapons supplied by the West and the Soviet bloc, the Sudanese have been fighting almost incessantly since the country proclaimed independence in 1956.

The predominantly Muslim north and the mostly Christian south have decided that they can no longer live under one roof. The north shares much of the blame for this owing to its aggressive campaign of Islamization in the south.

The referendum was agreed to in a peace deal signed by the south and north Sudan in 2005.

The role of oil

If everything goes according to plan, the world's 193rd state (according to the UN list) will be proclaimed in Juba, the capital of Southern Sudan, on July 9. After the south splits from the north, Sudan will cease to be Africa's largest state, ceding first and second place to Algeria and Congo, respectively.

The new country should fare quite well, at least initially, thanks to its large oil reserves. However, nearly 90% of the 450,000-500,000 barrels of oil produced in Sudan each day comes from the south, while the processing and transportation facilities are located in the north. This means that these future neighbors will have to share profits.

This imbalance could lead to disputes and even war. Both sides have been bled dry by 20 years of civil war and will likely lack the resources to wage a new war, this time as independent states. That being said, it is rumored that the south, fearing an attack from the north in the wake of the referendum, has accumulated large weapon stockpiles.

On top of that, Sudan's oil resources are finite. BP and Total experts tentatively estimate the country's reserves at 6 to 7 billion barrels, and admit that the number could be much smaller. Some experts say that commercial production in Sudan will only be profitable for another ten years, and no one can say for sure what will happen after that.

The focus now should be to prevent oil from sowing discord between the north and the south. There is plenty of fuel to ignite the smoldering ashes of mistrust and hostility between these future neighbors.

The challenge confronting the UN is to restructure Sudan's oil industry (the backbone of its economy) gradually and without causing any political fallout. The north and the south will have to learn to coexist as neighbors, otherwise they run the risk of dragging half of Africa into a terrible conflict.

A helping hand from China

China has wisely developed good relations with both Khartoum and Juba. Undeterred by the civil war and the unreliability of both sides, China invested huge sums in Sudan's infrastructure. It has helped build roads, pipelines, hospitals, schools, stadiums and shops.

In the last 15 years, China has invested approximately $15 billion in Sudan, and China National Petroleum Corporation (CNPC) has filled the vacuum left by Chevron.

Twelve years ago, China's presence in Sudan was negligible. Today it accounts for 50% of Sudan's exports and holds large stakes - from 40% to as much as 95% - in the four oil consortiums operating in north and south Sudan.

China has built pipelines from fields in the south to Port Sudan on the Red Sea, and it purchases anywhere from 65% to 80% of the oil produced in the country on any given day.

One thing is clear: China is not planning to cede its carefully cultivated position in the country to anyone.