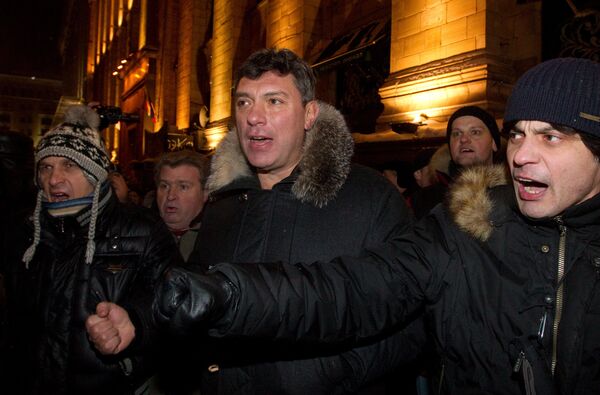 The pro-Kremlin youth nationalist movement Stal (Steel) has launched a campaign against Russian jailed opposition leader, Boris Nemtsov, mulling the rumors that the politician had been sexually abused.

Some 70 people, including opposition figures Konstantin Kosyakin and Eduard Limonov, were detained during the rally. Since then, people have been gathering outside the jailhouse in support of Nemtsov and other opposition activists.

On January 6, Russian blogosphere was bursting out of the reports that Nemtsov had allegedly been sexually abused in the detention centre.

Soon after the shady news appeared, Stal's activists handed to Nemtsov a book titled "Free yourself. How to overcome abuse and its consequences," the movement said on its website.

"If the abuse really took place, the victim definitely needs support," Stals's leader, Oleg Sokolov said. "We hope this act of violence will not be able to break Boris Nemtsov's personality and he will go at large as the more mature, strong and wise man."

"I guess, now nobody doubts that our power is heinous," Novaya Gazeta cited Nemtsov as saying. "I propose calling all the pro-Kremlin activists Kremlin roosters from now and then. It is short and sweet."