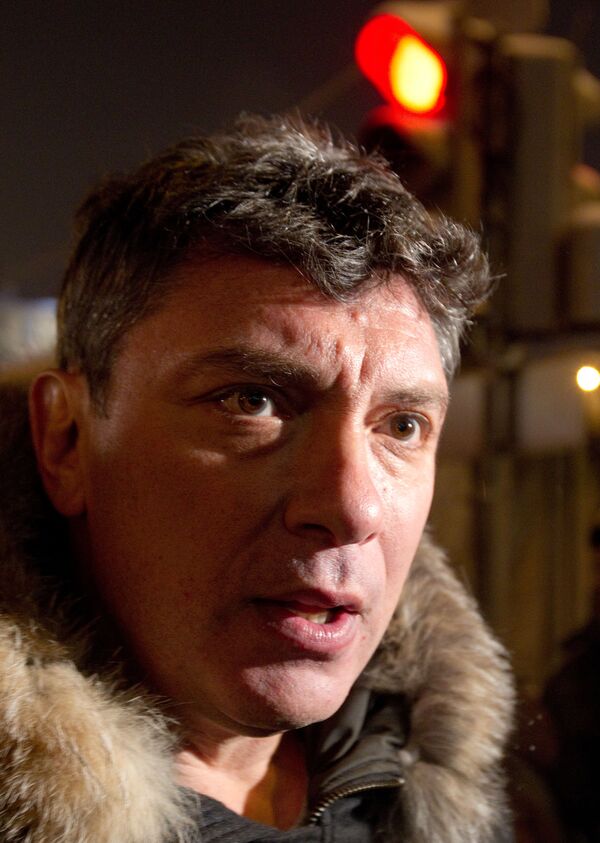 © RIA Novosti . Ilya Pitalev
/
Go to the photo bank
Subscribe
The United States have expressed surprise over the recent arrest of Boris Nemtsov, the leader of the Russian opposition Solidarity movement.

The United States have expressed surprise over the recent arrest of Boris Nemtsov, the leader of the Russian opposition Solidarity movement.

Moscow district court on Sunday sentenced Nemtsov to 15-day-long arrest over disobedience to police during a rally on capital's central Triumfalnaya Square December 31.

"Months ago, we were pleased that the Moscow authorities reversed their previous policy and decided to allow peaceful demonstrations on the 31st of every other month," a statement by U.S. National Security Council spokesman Mike Hammer issued on Monday read.

"Therefore, we were surprised to learn that some of these demonstrators were arrested on December 31st, and in the case of Boris Nemtsov and some others, given long sentences for what seemed to be an exercise of their constitutional rights," Hammer's statement read.

Two protest rallies - one sanctioned and one not, were held at the Moscow's central Triumfalnaya Square December 31. Apart from Nemtsov, opposition leaders Eduard Limonov, Konstantin Kosyakin and Ilya Yashin were detained several hours before the beginning of 2011.

Nemtsov, a staunch critic of Russian Prime Minister Vladimir Putin, in an interview with the liberal Moscow radio station Ekho Moskvy called the sentence "mockery of common sense" and said would challenge it.

The politician called the allegations against him trumped up. He also said he met the new year in a cell with to windows and beds.

"President Obama met with Boris Nemtsov in Moscow in July 2009 and continues to admire his work in promoting democratic development in Russia," Hammer said in the statement.