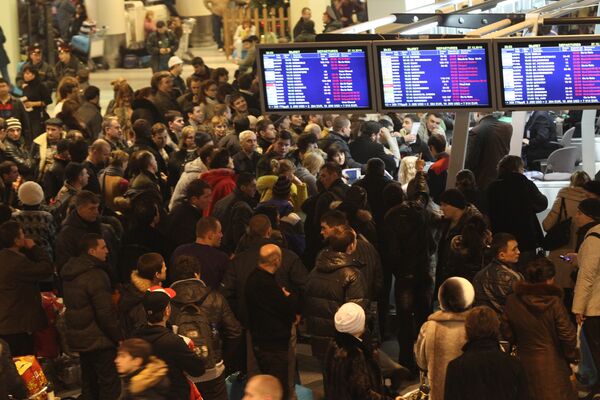 Russian Prime Minister Vladimir Putin handed out blistering criticism on Wednesday to airport and airline officials who have failed to adequately deal with passengers during mass flight delays in Moscow in the last few days.

"How did you work with people? Not at all. Domodedovo airport was actually left without electricity, but people continued to come to the airport. Where was the alert? It was nowhere...What work is this, I wonder? You should have warned people that the airport was out of order, no flights possible," Putin said.

Thousands of passengers were stranded at Moscow airports following an ice storm that struck across Central Russia over the weekend. Hundreds of flights have been canceled and delayed as severe freezing rain caused serious power outages.

Some 20,000 passengers have been affected by the flight chaos, according to the Russian Tourism Association, while airport authorities put the number at 10,000.

"No vacations until a specific order. Everybody should be at work," Putin said, adding the order also included the governors of Russia's 85 regions.

Meanwhile, Russia's biggest airline, Aeroflot, which cancelled over 200 flights during three days of disruption this week, said it would compensate those passengers whose flights were delayed for the cost of their tickets.

"We will fully compensate all departed passengers who had been stranded because of our fault, for the cost of their ticket," Aeroflot's CEO Vitaly Savelyev said.

Aeroflot faces a shortage of aircraft de-icing fluid that will presumably run out on December 31, Savelyev said. The fluid has been supplied from abroad since Russia did not produce the reagent, he added.

Putin responsed by ordering the Industry Ministry to think about how to produce the fluid in Russia.

Aeroflot CEO Savelyev said the airline would return to schedule for short-haul flights by midnight, and for long-hauled flights from Thursday.