A question of force: Belarusian regime lashes out at opposition 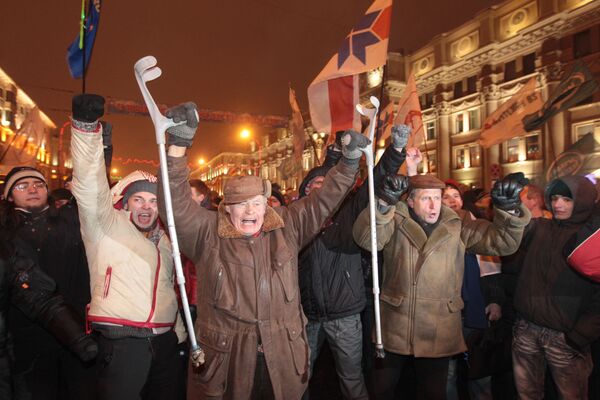 © RIA Novosti . Ilya Pitalev
/
Go to the mediabank
Subscribe
International
India
Africa
The main intrigue of Belarus' December 19 presidential election was not the number of votes cast for Alexander Lukashenko or for the opposition candidates, but the perennial question: who resorted to violence first and why.

The main intrigue of Belarus' December 19 presidential election was not the number of votes cast for Alexander Lukashenko or for the opposition candidates, but the perennial question: who resorted to violence first and why.

This came as a heavy blow to the country, which was just beginning to emerge from international isolation.

Why did the authorities arrest five opposition candidates, detain hundreds of protesters and in general use unprecedented force to disperse a protest in downtown Minsk?

The EU and the United States have recently indicated that they would tolerate another term of Lukashenko's rule provided he guarantees the presidential election is held at least in keeping with the minimum democratic requirements. For the first time since 1996, the president of an EU country and the foreign ministers of Poland and Germany visited Belarus before the country went to the polls.

Alas, Lukashenko has not lived up to their expectations. Why did the Belarusian leader opt for such a crude scenario if he knew that it risked destroying all that he had achieved through his concerted diplomatic efforts?

The opposition claims that he was taken aback by the sheer number of protesters who came out onto the streets that evening after the election. People from the headquarters of candidate Vladimir Nekliaev, a member of the Belarusian Helsinki Committee's Observation Council, said 40,000 protesters gathered on October Square and in nearby streets. The police and independent observers agree that the actual number was much smaller. Whatever the reality, Lukashenko's prediction that "nobody will come out into the square" did not hold true.

Who broke windows and tried to force their way into the parliament building? Whoever it was, whether these actions were carried out by protesters or by covert police-provocateurs amid their ranks, this alone was not sufficient grounds for ordering the arrest of five presidential candidates even before the votes were fully counted. And the attack on Nekliaev and his supporters en route to the square is even more beyond the pale.

The presidential staff and the KGB claim the opposition had prepared "trucks with metal bars," but their version of events does not provide a sufficiently substantial reason for kidnapping Nekliaev twice, first from Kollektornaya Street and later from the hospital where he ended up.

Confounding the rationale and expectations of both East and West, Lukashenko reenacted the scenario he adopted in the 2006 elections. Instead of accepting a legitimate victory with a smaller number of votes, he ordered that the protesters be dispersed, his rivals arrested and the most "evil" of them punished especially cruelly.

The victim in 2006 was Alexander Kozulin, a former rector of Belarusian State University. This year it is Nekliaev. Why?

Both men were once on Lukashenko's team and accompanied him on trips, which could indicate that their former boss's anger was fuelled by their "betrayal." But there is more to this than meets the eye.

Kozulin and Nekliaev were never part of the radical national-democratic opposition, which a decade ago was the only force in Belarus that came out and criticized Lukashenko and received western grants. The national democrats, with their idiotic ramblings about the "pure" Belarusian ethnic identity unpolluted by Muscovites heavily tainted with Tartar blood, never had any hope of winning more than 10%-15% of the vote.

This suited Lukashenko, who tried to scare both Moscow and his own people with a possible national democrat victory and presented himself as "the lesser of two evils."

Infuriatingly for Lukashenko, Kozulin avoided Russophobic statements. Nekliaev went even further, not only eschewing Russia-bashing sentiment but also advocating the preservation of the Union State with Russia. To an extent, that balanced stance boosted Nekliaev's popularity ahead of the elections.

Lukashenko could not forgive this. He saw in Nekliaev a dangerous rival in the area closest to his heart: pan-Slavic solidarity. Nekliaev became particularly dangerous after the Belarusian president's recent quarrel with Moscow, since Lukashenko has been drifting ever closer to the national democratic rhetoric about the uniqueness of Belarus. Nekliaev was "punished" because he stood a chance of winning over pro-Russian voters.

What now? The worst-case scenario would see renewed confrontation between Lukashenko and radical nationalists, which would back Belarus into a dead-end and force it to make the unpleasant choice between a "European identity" and close ties with Russia.

Aware of this danger, the only presidential candidate who has not yet been detained, economist Yaroslav Romanchuk, has put forward pragmatic policy of friendship with Russia combined with a "European vector" in the country's foreign policy.

But even if Lukashenko now adopts more civilized forms of struggle, people will never forget the violence he permitted on election night. The Belarusian president has crossed that line, dangerously expanding the list of methods the authorities and the opposition are likely to use now as they fight for power.