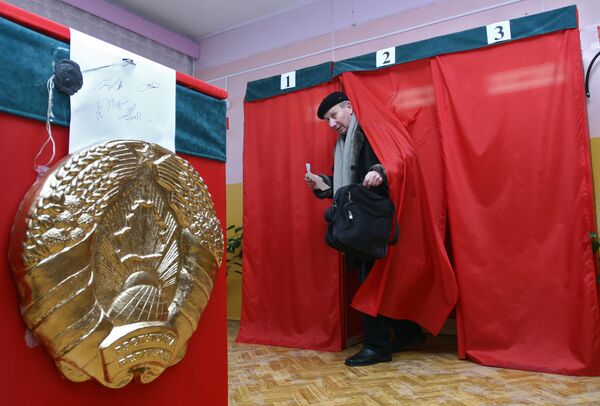 Yesterday's presidential elections in Belarus were marred by a "flawed" vote count, the OSCE said on Monday and decried the "heavy-handed" police response to last night's opposition rallies, calling for the government to account for those detained.

Yesterday's presidential elections in Belarus were marred by a "flawed" vote count, the OSCE said on Monday and decried the "heavy-handed" police response to last night's opposition rallies, calling for the government to account for those detained.

Thousands of Belarusians gathered in ten-below mist late Sunday to protest the landslide victory won by strongman President Alexander Lukashenko with 79.7 percent of the vote, according to preliminary results.

Some protestors tried to storm the Parliament, provoking a fierce response by Interior Ministry troops.

"This election failed to give Belarus the new start it needed," said Tony Lloyd, who has led the short-term OSCE observer mission.

"The counting process lacked transparency. The people of Belarus deserved better. And, in particular, I now expect the government to account for the arrests of presidential candidates, journalists and human rights activists," he said on Monday.

Opposition leader Vladimir Nekliaev, a 64-year-old poet, was taken into custody straight from hospital late last night despite wounds to the head when he was batoned on his way to the rally. Another six opposition candidates, some wounded, have also been arrested.

In the run-up to elections, Lukashenko was given 90 percent of all time devoted to political news according to the OSCE which still noted "specific improvements" referring to the let-up on opposition campaigning, granting candidates fleeting airtime in state media.

Both the EU and the United States have criticised the police reaction.

"[EU High Representative for Foreign Affairs and Security Policy] Catherine Ashton condemns the brutality carried out after yesterday's presidential elections in Belarus, especially the beating and arrest of several opposition leaders including a host of candidates for the presidency," the EU said.

The EU had reached out to neighboring Belarus ahead of elections, but ties now look set to wither once again, driving the post-Soviet nation of 9.6 million back into Russia's fold.

"Of course, for us the development of the government and democracy is very important," Russia's President Dmitry Medvedev said on Monday.

"But I would like to emphasize that we need to wait for the (official) results of these elections, and here we hold that these results should reflect the sovereign will of the people."

"It's hard to say what we have not yet done to have the elections recognized by the international community. At the OSCE's behest we altered our electoral legislation. At the request of our European friends we broke all existing election laws at their demand," Lukashenko said.

"The elections went ahead properly, whoever assessed them."