Opposition rally over in Minsk as Lukashenko attributed landslide win 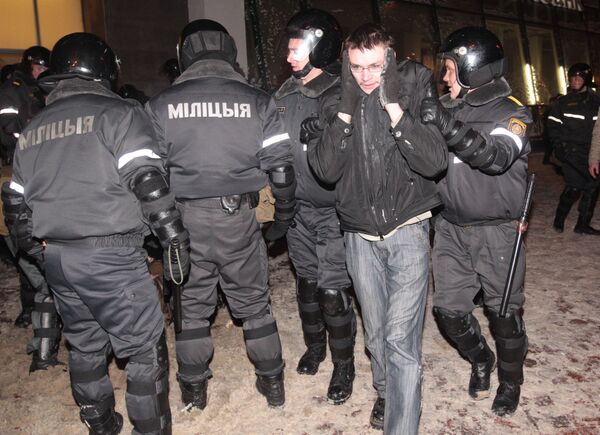 An unauthorized rally by the Belarusian opposition in the country's capital Minsk is over, no protestors are in the street.

An unauthorized rally by the Belarusian opposition in the country's capital Minsk is over, no protestors are in the street, a RIA Novosti correspondent reported.

There remain a lot of police in the streets, but the Interior Ministry has declined to comment on riots that followed Sunday's presidential election. The opposition said incumbent leader Alexander Lukashenko, who has ruled the country since 1994, rigged his reelection: exit polls show he won a landslide victory.

Earlier thousands of protestors tried to storm the government building but were dispersed by police.

According to some sources, a few journalists were detained and even beaten during the clampdown on the rally participants.

The Central Election Commission said the voter turnout was 90.4%. An exit poll by TNS gave Lukashenko over 72%; opposition candidates Andrei Sannikov and Vladimir Nekliaev received 6% each, others gained no more than 3.3%. Other exit polls gave Lukashenko from 79% to nearly 82%.

Nekliaev was reportedly beaten by police and hospitalized.