Over 1,300 detained in Moscow as police head off riot suspects 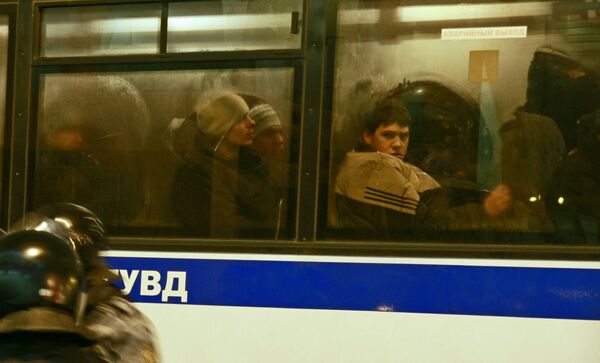 Over 1,300 people were arrested in Moscow on Wednesday as police mounted a mass operation to prevent further race-hate riots, a police source said on Thursday.

Police were on high alert on Wednesday following rumors that nationalist groups and migrants from the southern Russian North Caucasus region were planning to clash near the city's central Kievskaya railway terminal.

Police said about 30 people were injured as officers sealed off areas around the rail terminal.

There were also arrests in St Petersburg as police prevented clashes between nationalists and migrants.

The new race-hate protests came after the Russian capital saw its biggest public disturbances for almost a decade on Saturday as a 5,000-strong crowd of nationalists and football hooligans clashed with police near Red Square. Rioters also attacked people from the country's North Caucasus region.

President Dmitry Medvedev called the disorder, which was triggered by the death of a football fan in a brawl with North Caucasus migrants, a threat to the stability of the Russian state.