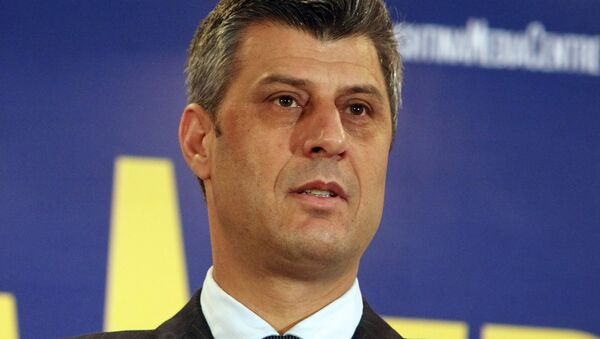 © Sputnik / Ilya Pitalev
/
Go to the photo bank
Subscribe
Kosovo, which unilaterally proclaimed its independence from Serbia in 2008, may get NATO membership within four years.

Kosovo, which unilaterally proclaimed its independence from Serbia in 2008, may get NATO membership within four years, Kosovo's acting premier said.

The Kosovo government, led by Hashim Thaci, had to resign after the parliament voted in favor of a no-confidence motion introduced by the opposition. However, Thaci hopes to regain the post as a result of the early parliamentary elections slated for December 12.

"I hope that during the first 15 month of my second term [as prime minister] we would get a visa-free regime with the European Union. And, during my term, Kosovo will become a NATO member," he said in an interview with Austria's national daily, Der Standard.

He also expressed readiness to resume dialog with Belgrade to discuss efforts to locate persons who went missing during the 1998-1999 conflict with Serbia. Pristina is also willing to discuss issues of infrastructure, transport, energy, communications and fight against organized crime.

Thaci also said in the interview that Serbia and Kosovo would recognize each other's independence and get the European Union membership "as two sovereign states" as a result of the talks.

The timeframe and agenda for the dialog between Belgrade and Pristina is yet to be set, but the talks are widely expected to begin after the December 12 elections.

The UN International Court of Justice ruled on July 22 that Kosovo's declaration of independence from Serbia did not violate general international law. But Resolution 1244 on Serbia's territorial integrity remains in force.

A total of 69 out of 192 UN member states have recognized Kosovo, which unilaterally proclaimed independence in February 2008. Serbia, Russia, China, India and some other countries have not recognized it, saying international law was violated.

Kosovo's independence from Serbia is formally recognized by 22 out of 27 EU member states. Despite calls from the European Parliament to do so, Kosovo has not been recognized as a sovereign state by Greece, Cyprus, Slovakia, Romania and Spain.