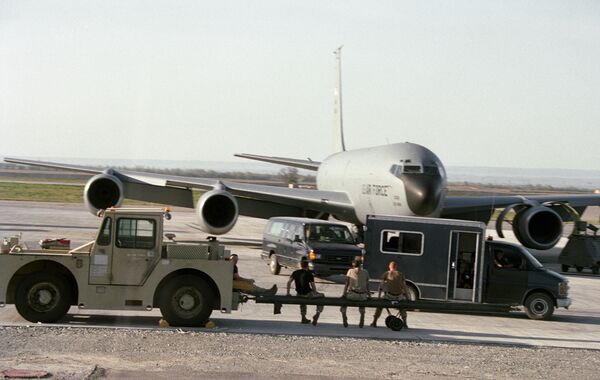 Kyrgyzstan on Friday called on the United States to suspend its renewed contract with a controversial company which had supplied jet fuel to the Pentagon's transit center in Bishkek over the last six years.

Kyrgyzstan on Friday called on the United States to suspend its renewed contract with a controversial company which had supplied jet fuel to the Pentagon's transit center in Bishkek over the last six years.

The U.S. Department of Defense on Wednesday announced it has renewed its cooperation with the London-based Mina Corp Ltd. The company was reportedly in close rapport with ousted President Kurmanbek Bakiyev's son Maksim, who controlled most fuel contractor firms in the country during the ruling of his father.

"In relation to this The Kyrgyz governments calls on the United States to suspend cooperation with Mina Corp. until the country's prosecutors have not completed an investigation [into the ways fuel had been delivered to the center under Bakiyev]," a statement by the Kyrgyz Foreign Ministry said.

"The Kyrgyz Republic expresses hope the U.S. government will take all the necessary efforts aimed to provide transparency and remove doubts around the fuel deliveries to the transit center in the international airport of Manas."

Corruption schemes led to the levying of export duties on all refined oil products coming in from the Russian Federation, the statement said, adding that in case that the deliveries are organized via state structures and transparently, the Kyrgyz budget would receive up to $60 millions per year.

The military base on the territory of Bishkek's Manas airport was built in 2001 as a part of U.S.-led international military operations in nearby Afghanistan.

In early 2009, the Kyrgyz government announced that all U.S. troops would have to leave the country, but later agreed to a deal with the Pentagon on improved terms under which the facility was turned into a transit center.

In late October the United States welcomed a proposal on establishing a joint Kyrgyz-Russian venture which would involve Russian gas giant Gazprom to supply aviation fuel to the Pentagon's transit center in Bishkek.