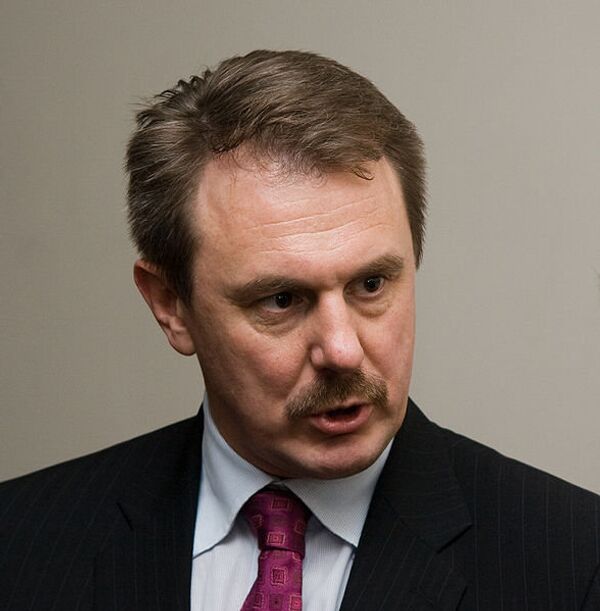 © Photo : Wikipedia/Papuass
Subscribe
The Latvian opposition has demanded the dismissal of newly appointed Foreign Minister Girts Valdis Kristovskis in connection with his "xenophobic" ideas, an opposition lawmaker has said.

The Latvian opposition has demanded the dismissal of newly appointed Foreign Minister Girts Valdis Kristovskis in connection with his "xenophobic" ideas, an opposition lawmaker has said.

An e-mail discussion between Valdis, a leader of Latvia's conservative Unity bloc dominating the parliament, and Aivars Slucis, a Latvian-born doctor living in the United States, was published on the Internet on Wednesday, when Kristovskis was confirmed as Latvia's new foreign minister.

In an e-mail addressed to Kristovskis two weeks ago, Slucis said he "would not be able to treat Russians in the same way as Latvians." Kristovskis replied by saying "I agree with your evaluation and your views."

"The fact that Kristovskis has supported xenophobic statements is a violation of all red lines. We [the opposition] will do everything possible to dismiss him," Boriss Cilevics, a member of the parliament's second largest Harmony Center faction, said.

The Latvian opposition wants the parliament to hold an emergency meeting to consider the issue, Cilevics said. A total of 25 lawmakers' signatures are needed to make it possible. Harmony Center together with the opposition For a Good Latvia party hold 37 seats in the 100-strong Saeima.

Russia has long been at odds with the Baltic states of Latvia, Lithuania and Estonia over perceived attempts to rewrite the history of World War II and diminish the Soviet role in the defeat of Nazi Germany.

While Russia maintains that the Red Army liberated the Baltic states from German invaders, many residents of the republics put the two "occupations" on a par.