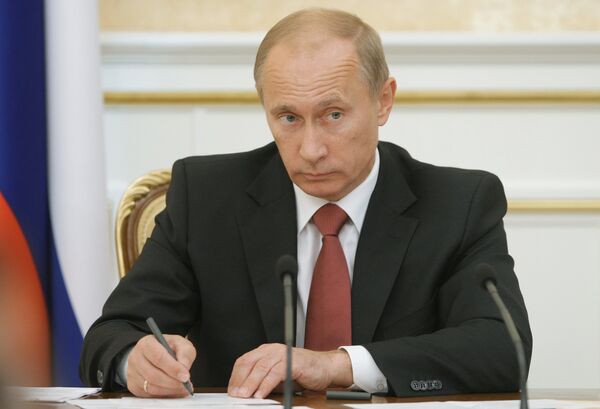 © RIA Novosti . Alexey Nikolsky
/
Go to the photo bank
Subscribe
Russian Prime Minister Vladimir Putin has been named the fourth most powerful person in the world by Forbes magazine.

Russian Prime Minister Vladimir Putin has been named the fourth most powerful person in the world by Forbes magazine.

The World's Most Powerful People in 2010 was released on Wednesday with the Russian leader was eclipsed only by Chinese President Hu Jintao, his U.S. counterpart Barack Obama, and Saudi King Abdullah bin Abdul Aziz.

President Dmitry Medvedev, who heads Russia in "tandem" with Putin, was ranked 12th in the list.

After serving as president for two terms from 2000 until 2008, Putin picked Medvedev as his successor and took the position of prime minister for himself.

The most recent approval ratings released by pollsters show Medvedev effectively level with Putin for the first time, with analysts suggesting the president was boosted by his firing of Moscow's long-serving mayor, Yury Luzhkov.

Medvedev, who has faced criticism for being "all talk and no action," showed off his presidential powers in late September by sacking Luzhkov after the two had a series of disagreements.

Putin and Medvedev have hinted that one of them, but not both, will run in Russia's 2012 presidential elections. Russia's next president will have a six-year term due to constitutional changes approved in 2008. Should Putin be elected, he would be able to run for a second six-year term in 2018 and serve as president beyond his 70th birthday.

"The people on this list were chosen because, in various ways, they bend the world to their will," Forbes said.