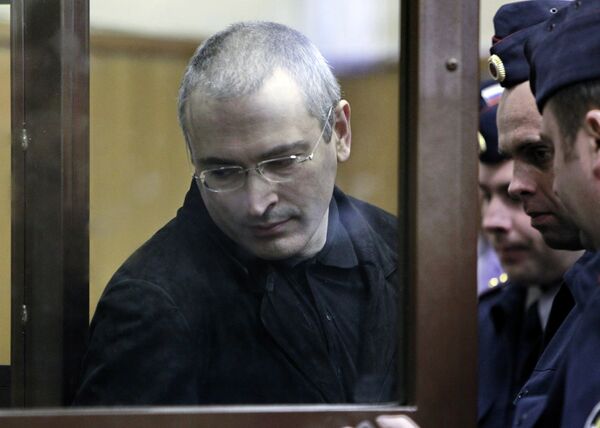 New charges could be filed against former Yukos CEO Mikhail Khodorkovsky and his business partner Platon Lebedev, their lawyers said on Tuesday.

"I hope they [the investigation] will have enough sense not bring new charges, but this cannot be guaranteed," Yury Shmidt said.

Konstantin Rivkin, another defense counsel, said there had been persistent rumors about a third criminal case and that prosecutors had often alleged in court that Khodorkovsky and Lebedev had committed their crimes as part of an organized group.

"If they decided to declare the entire Yukos management an organized criminal group, they need to go ahead and dot all i's," Rivkin said.

Both lawyers said they did not know whether Khodorkovsky and Lebedev would be released from a pretrial detention center after November 17, when the custody term in their second case expires.

The verdict in the new trial of Khodorkovsky and Lebedev is due on December 15, Judge Viktor Danilkin said earlier on Tuesday.

Khodorkovsky and Lebedev, who have already spent seven years behind bars for tax evasion, are facing new charges of embezzling 218 tons of oil from Khodorkovsky's former oil firm Yukos and laundering over 3 billion rubles ($97.5 million) in revenues. If found guilty, the two men face another seven years in jail.

Prosecutors denounced Khodorkovsky's and Lebedev's defense case as "lies" in a hearing on Monday.

Observers say the two men will most likely be found guilty as the Kremlin wants to keep them in jail for as long as possible.