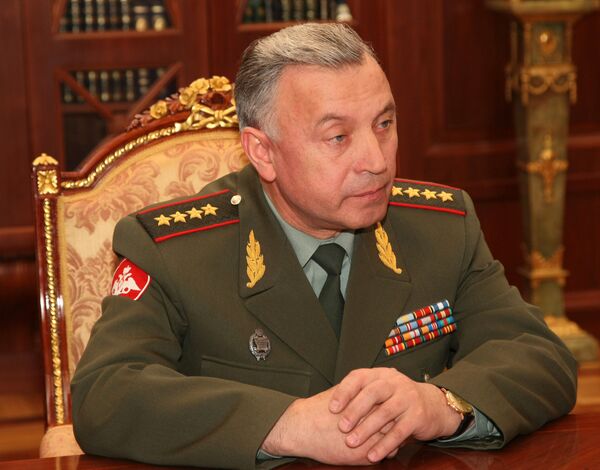 © Vladimir Rodionov
/
Go to the photo bank
Subscribe
Russia and NATO will do their best to reach compromises on the most controversial issues, the chief of the Russian Armed Forces' General Staff, Gen. Nikolai Makarov, said on Monday.

Russia and NATO will do their best to reach compromises on the most controversial issues, the chief of the Russian Armed Forces' General Staff, Gen. Nikolai Makarov, said on Monday.

Following talks with NATO's supreme allied commander for Europe and commander of U.S. European Command, Adm. James G. Stavridis, who is currently on his visit to Russia as a NATO delegation member, Makarov said that they had mainly focused on missile defense issues.

He also said they had discussed counter-terrorism, Afghanistan and piracy.

"On the majority of problematic issues we found a common approach - there are certain disagreements, but I think these...will be very attentively studied and we will certainly come to a general understanding and a common opinion," he added.

NATO Secretary General Anders Fogh Rasmussen will visit Moscow on November 3 to discuss cooperation on Afghanistan, in particular expanding the rail transit of NATO shipments via Russian territory and the training of Afghan anti-drug specialists.

Other topics will include "Euro-missile defense," the fight against international terrorism and sea piracy.

Earlier this month, the military alliance invited Russia to attend a NATO summit in Lisbon in late November, while Russian President Dmitry Medvedev will attend the Russia-NATO Council summit, part of the Lisbon summit, on November 20.

Topics on the agenda will include such priorities as Euro-Atlantic security, regional conflicts, disarmament, nonproliferation, international terrorism, missile defense and arms control.