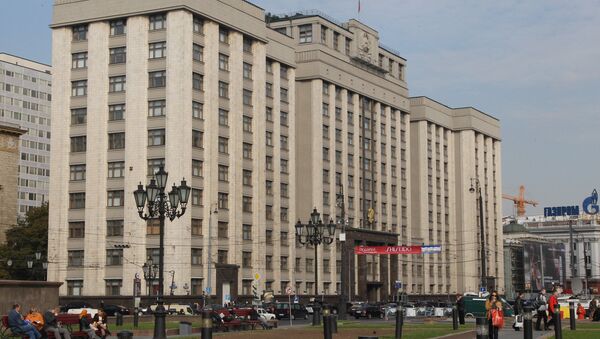 © Sputnik / Vladimir Fedorenko
/
Go to the photo bank
Subscribe
The lower house of the Russian parliament has reiterated its call for the United Nations and international parliamentary organizations to urge the United States to end a half-century long economic blockade of Cuba.

The lower house of the Russian parliament has reiterated its call for the United Nations and international parliamentary organizations to urge the United States to end a half-century long economic blockade of Cuba.

The State Duma adopted the declaration prepared by the Communist Party's faction on Friday.

"Declarations of new approaches to foreign policies based on unconditional respect of commonly recognized international legal principles, which followed the current U.S. administration's coming to power, gave us hope that an end to the economic, trade and financial blockade of Cuba will be confirmation to [U.S. authorities'] refrain from forcible methods to resolve international issues," the State Duma lawmakers said in a statement.

But the United States continues to "break norms and principles of relations between sovereign states" and "ignores the opinions of the overwhelming majority of international community members represented in relevant UN General Assembly's resolutions," the document said.

The United States began its embargo on Cuba, which has become the longest economic blockade in history, on October 19, 1960, after Cuba nationalized the properties of U.S. citizens and corporations.

The global community, including Washington's allies Canada and the European Union, have long been opposed to the embargo. In 1996, Washington toughened the sanctions further by barring third countries' commercial ships en route to and from the communist island from entering U.S. ports.

Under Barack Obama, the United States has loosened money transfer and travel restrictions on Americans with relatives in Cuba, but demanded political and economic reforms from the country as condition for lifting the embargo.

Cuba said damage inflicted on it by the embargo exceeded, as of December 2008, $96 billion or $236 billion at the current exchange rate. Cuban Foreign Minister Bruno Rodriguez has described the embargo as an "act of genocide."