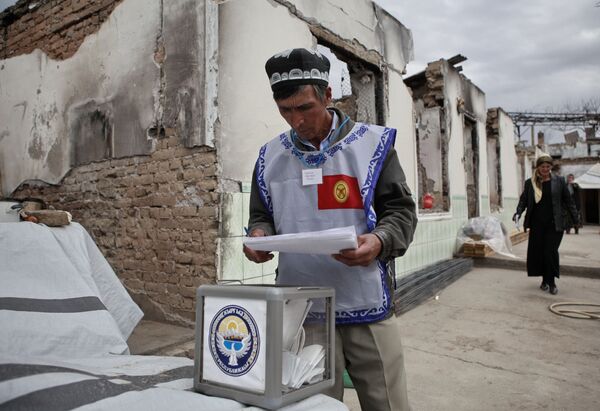 After 100% of the ballots were counted by the country's Central Election Committee, five parties were able to pass the 5% barrier to form the single-chamber parliament. Almost 56% eligible voters took part in the elections.

The list of the parties is topped by the nationalist Ata-Zhurt party with 8.88% of the vote and the Social Democratic Party (8.04%).

They are followed by the Ar-Namys party of former prime minister Felix Kulov with 7.74% of the vote, the Respublika party, which has not sided with either the interim government or the opposition (7.24%) of the vote, and the pro-constitution Ata-Meken party (5.6%).

Twenty-nine parties competed in the election for seats in Kyrgyzstan's 120-member parliament, which will see its powers increase as part of constitutional changes approved in late June in a national referendum that confirmed Roza Otunbayeva as interim president following the ouster of President Kurmanbek Bakiyev in April.

Sunday's elections were the first step to bring a new system of government to Kyrgyzstan which will consist of a single-chamber parliament that will choose a premier minister by a majority vote. The premier will govern the nation, whereas the president will hold a symbolic role with virtually no powers.

Otunbayeva, who was named president after Bakiyev fled the country, will remain president until the end of 2011, after which a new president will be elected. She has no right to run for president.