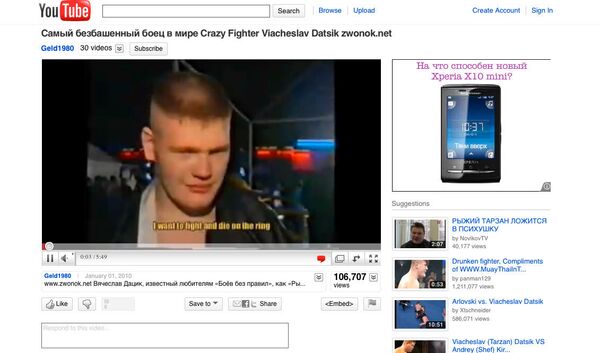 © Youtube
Subscribe
Norwegian authorities have denied political asylum to former Russian mixed martial arts fighter Vladislav Datsik, who was detained in Norway after he escaped from a psychiatric ward in St. Petersburg, AFP said on Thursday.

Norwegian authorities have denied political asylum to former Russian mixed martial arts fighter Vladislav Datsik, who was detained in Norway after he escaped from a psychiatric ward in St. Petersburg, AFP said on Thursday.

"We are currently preparing the documents for his [Datsik's] extradition on charges of illegal possession of arms" Oeyvind Nordgaren from the Oslo Police District's organized crime unit said.

Datsik, 33, was arrested on September 21 when he appeared at an immigration office in Oslo seeking asylum. He handed the weapons he was carrying over to the police.

The martial arts fighter was involved in political activities as a member of the ultranationalist movement, Slavic Union, which was banned in Russia this year but has reportedly opened its office in Norway. The party posted an online video claiming that Datsik arrived to the country onboard an arms-trafficking vessel.

Russian officials warned Norwegian police that Datsik is suspected of planning an armed attack on embassy personnel in Oslo or Muslims living in Norway, Dagbladet paper said on Thursday.

Datsik was arrested in 2007 after a series of robberies in mobile phone stores. However, psychiatric examinations concluded that he was mentally ill and he was exempted from being held responsible for the criminal charges.