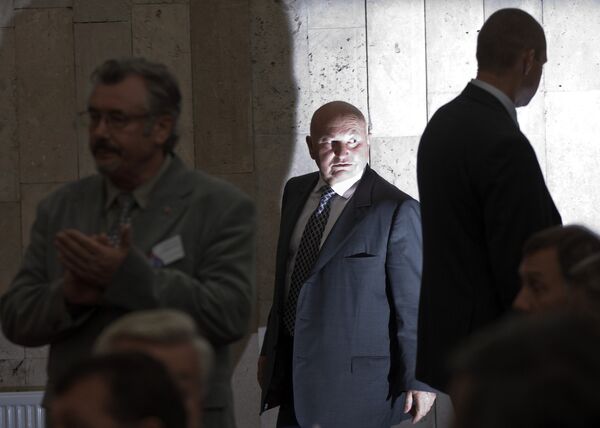 Independent Russian magazine The New Times published late on Tuesday a copy of a letter apparently written by sacked Moscow Mayor Yury Luzhkov to Russian president Dmitry Medvedev a day before he was dismissed.

Independent Russian magazine The New Times published late on Tuesday a copy of a letter  apparently written by sacked Moscow Mayor Yury Luzhkov to Russian president Dmitry Medvedev a day before he was dismissed.

Neither the government or Luzhkov have confirmed or denied the validity of the letter.

Luzhkov, 74, was fired by Medvedev on Tuesday after weeks of speculation about his worsening relations with Russian President Dmitry Medvedev and his imminent dismissal or resignation.

"You need a different Moscow mayor, who can be your own. Luzhkov is independent and inconvenient," the letter, which is believed to be authentic, says.

"It is necessary to start preparing for the big elections early and appoint another [mayor]. That is clear," Luzhkov continues, presumably alluding to the 2012 presidential elections in which Medvedev is expected to face off against his long-time mentor Russian Prime Minister Vladimir Putin, who has hinted he is going to make a bid to return to the presidency

The former mayor's dismissal followed an extensive smear campaign by the Russian state-run media in which he was accused of corruption, inability to solve a number of the city's most pressing problems and using his power to help his billionaire wife make money.

In the letter, Luzhkov blames Medvedev for orchestrating the "defamation campaign."

"Mister President, society did not agree with you...The media campaign has come to be associated with you," the document said.

Kremlin spokeswoman Natalya Timakova said the letter would not have influenced Medvedev's decision to dismiss Luzhkov.

"The president had not read the letter when he signed the dismissal order for Luzhkov, but it would not have influenced his decision anyway," she said.