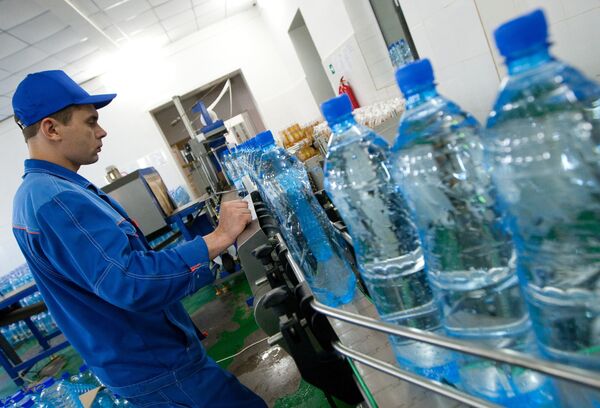 © RIA Novosti . Sergei Krasnoukhov
/
Go to the photo bank
Subscribe
Purchasers of mineral water in south Russia's Stavropol Territory will soon be able to drink safe in the knowledge that the Supreme Being has guaranteed its quality.

Purchasers of mineral water in south Russia's Stavropol Territory will soon be able to drink safe in the knowledge that the Supreme Being has guaranteed its quality.

"The quality [of local water] is truly a gift from God," Archbishop of Stavropol and Vladikavkaz Feofan said last week, during celebrations of the 200th anniversary of the local spa city of Zheleznovodsk.

He added that by putting the slogan on bottles of local mineral water "we are paying our debts to God" and "praise the world of nature, the beauty and quality given by God."

The governor of the region, Valery Gayevsky, more than welcomed the initiative.

"We should also consider the possibility of the wider usage of this slogan - not only in relation to mineral water, but also to other products from Stavropol," he said.

This is not the first attempt to sell "holy" water in Russia. U.S. businessman John King launched the production of "truly Russian" water under the Holy Springs trademark in 1994. The water, bottled near the Central Russian city of Kostroma, bore the signature and blessing of the local archbishop.

By the time when the trademark was bought by Nestle in 2002, Holy Springs accounted for hefty 12% of the Russian drinking water market, but sales dropped significantly in the next few years as Nestle removed the slogan.

The initiative of the Stavropol church and civil authorities was met with a mixed reaction by local mineral water producers.

"The quality must be in the trademark," said Valery Nichik, a spokesman for the KMV+ company which bottles mineral water under Russia's most popular brands, such as Yesentuki and Slavyanovskaya.

Nikolai Stativkin, who heads another local water producer, Vital, said the slogan should be chosen with care "as it may cause disputes and differences."

Gleb Pilguyev, who heads the "Naturalny Produkt" wholesale supplier of Caucasus mineral waters, said the most important thing was to ensure that the slogan is placed only on bottles of high-quality water.

"There are those who bottle water which has no quality at all, and any reference to God would be simply inappropriate, it would just provoke His wrath. I'd rather they wrote something like "For God's sake, don't drink it" on some bottles," he said.

"But there are also those who produce high-quality water, and I have nothing against such a slogan on their products," Pilguyev added.

Sales of mineral water in Russia stood at almost $1.9 billion last year. On average, about 30% of all mineral water sold in Russia is counterfeit, but for some brands the figure exceeds 70-80%.