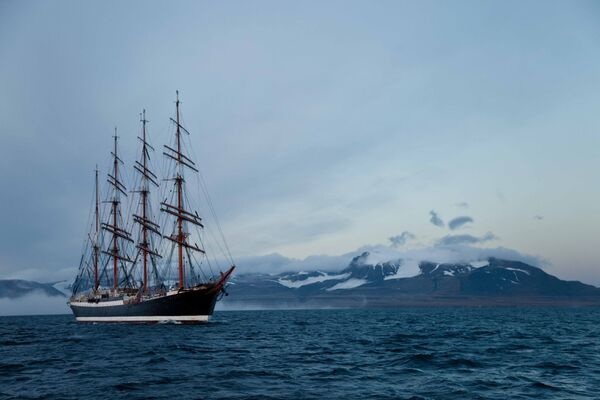 The Sedov left Murmansk on April 30, carrying cadets from the naval universities of Murmansk, Arkhangelsk and Kaliningrad. In five and a half months, it covered about 10,000 nautical miles.

“A ceremony will be held on board the ship on Thursday to mark the end of the northern expedition, during which the capsule containing soil from the Rybachy Peninsula will be handed over to the local history museum in Murmansk,” Zhitnik said.

During the expedition, the Sedov called at the ports of St. Petersburg, Klaipeda (Lithuania), Hamburg and Rostock (Germany), Amsterdam (The Netherlands), Reykjavik (Iceland), Tromso (northern Norway) and Barentsburg and Longyearbyen (Svalbard).

In Klaipeda, the crew and cadets attended the unveiling of a plaque commemorating the Soviet air pilots who died in the POW camp at Silute. In Hamburg, they laid wreaths at the Bergedorf cemetery’s monument to the 652 Soviet POWs who died in the Neuengamme concentration camp.

“The awards ceremony for the winners of the competition entitled ‘The Sedov Barque – Our Pride’ will be held on board the Sedov in Murmansk,” the spokesperson said. “The competition involved cadets as well as students and teachers at Murmansk State Technical University. One of the best works will be presented to the ship’s museum.”